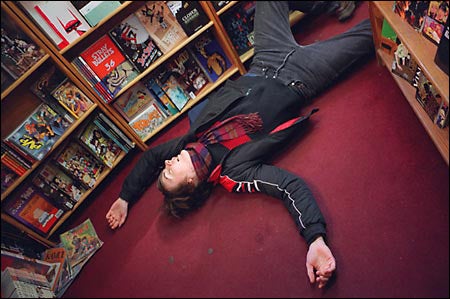 Karl Stevens spends each workday surrounded by art. Little wonder then, that after steeping in it for three years, some art inside him is trying to get out.

Stevens, a security guard at the Fogg Art Museum, has self-published his first graphic novel, “Guilty.”

The 64 pages of carefully drawn images tell the story of 20-something angst in the familiar settings around Cambridge and Boston. They tell the story of Ingrid and Mark, former lovers who meet by chance and whose subsequent tale is told in scenes ranging from the Fogg to Allston to a familiar local bar, the Cellar.

Stevens has been drawing as long as he can remember. He attended Montserrat College of Art and the Art Institute of Boston and has had illustrations published in The Boston Phoenix and in Legal Action Comics.

Stevens said he has never really been inspired by grand works of art and instead enjoys illuminating life’s neglected details. But it’s the chance to tell a story that draws him to the comic book and graphic novel medium.

“That’s what I’m more excited about, more than painting,” Stevens said. “I find I enjoy it a lot more, especially the writing.”

“Guilty” took shape over the past year and a half, with Stevens first fashioning a story line and then doing thumbnail sketches of the panels that would illustrate the story. He used his girlfriend and a friend as models for the main characters, photographed settings for the different scenes, and set to work drawing.

Stevens got a major boost in his graphic novel aspirations last year, when he received the Xeric Award, a grant from the Xeric Foundation, begun by a co-creator of Teenage Mutant Ninja Turtles, to help artists self-publish their work.

Stevens said self-publishing has been a challenge, but “Guilty” has been in local stores for two months and the 2,000 copies sitting in boxes in his closet are set for national distribution in the coming weeks.

He is hoping to sell his next work to a comics publisher rather than having to do it himself and is already at work. He doesn’t want to share many details, but said that at 70 pages for the first chapter, it’s shaping up to be an epic.