The moral essence of leadership

Former Duke and Wellesley president tells what it takes to lead

Nannerl Keohane, past president of Duke University and Wellesley College, and the newest member of the Harvard Corporation, offered an insider’s guide to leadership when she delivered “The Power of Leadership” at this year’s Edward L. Godkin Lecture Feb. 16 at the Kennedy School of Government.

Introduced by Kennedy School Dean David Ellwood as “one of the most admired and influential figures in academia,” Keohane described her choice to head up Wellesley, her alma mater.

“In 1981, my colleagues in political philosophy were somewhat bemused by my decision to move to the president’s office,” Keohane said. “Why would I leave the sunlit uplands of scholarship for Plato’s cave? Why would I spend my day helping people sort through shadowy reflections of reality, rather than directly contemplating the forms of truth? In fact, that image is way off the mark. Leadership requires as much mental acuity as scholarship but of a different kind, and the issues you deal with are anything but shadowy.”

Keohane described five traits that great leaders share. “First of all, good judgment,” she said. “Identifying issues and priorities, knowing where you put your time and energy, making decisions, choosing lieutenants. Like location in real estate or the economy in politics, it is the bedrock for everything else.”

The other four traits Keohane highlighted were how to get and use information, peripheral vision, courage, and integrity – “so people can count on you to do what you say and play fair with them. If you lack [integrity] they will be disinclined to follow you and always suspicious of your real motivations.”

But can you teach these qualities? “Very few can be taught in the abstract,” said Keohane, who referenced Aristotle, Machiavelli, and Virginia Woolf in her address. “A few are no doubt innate. But most if not all can be learned or enriched through experience.” 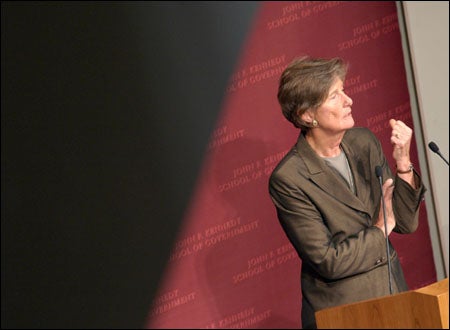 Perhaps most important in decision making, Keohane said, successful leaders know how to find an appropriate balance when faced with disparate impulses, such as patience and swiftness (“neither rushing to closure or taking forever”); flexibility and firmness (“when to stand and when to move”); compassion and ruthlessness (“you must care about the people you are trying to mobilize, but you also must be willing to make choices that will have negative consequences for some of them”).

Another element of leadership is not becoming intoxicated with leadership itself. “Leaders are subject to ordinary human frailties and particular pitfalls of power,” she said. “I don’t think power necessarily corrupts the power holder, if you have clear values and an effective moral compass. But exercising power over other people undoubtedly has its effects. It is easy to see how people become addicted to it.”

Keohane will join the Harvard Corporation as a fellow of Harvard College on July 1.

Formally known as the President and Fellows of Harvard College, the Harvard Corporation is Harvard’s executive governing board and the smaller of Harvard’s two boards, the other being the 30-member Board of Overseers.

The Godkin Lectureship was founded in 1903 by friends of Edwin Lawrence Godkin (1831-1902), editor of The Nation and the New York Evening Post. A video archive of the event can be viewed at the Kennedy School’s Institute of Politics Web site, http://www.iop.harvard.edu.