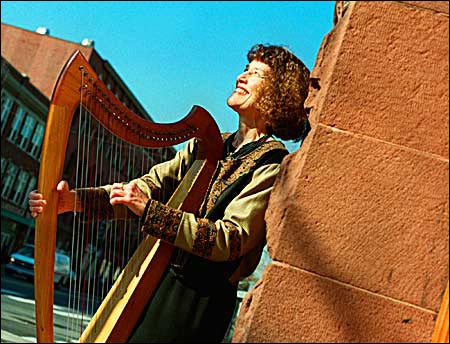 Sometimes a harp is more than a harp.

To folk harpist Margot Chamberlain, the harp is everything from a full-body experience to a compositional muse to a therapeutic tool.

“There’s something about the harp that has a tremendous effect on the listener and the player,” says Chamberlain, a project coordinator at the Reischauer Institute of Japanese Studies at Harvard, where she has worked since 1991. “It speaks to the body, the mind, and the soul all at once.”

Trained as a pianist as a child, Chamberlain had the harp thrust upon her – literally – in 1972, when the leader of a medieval music group she performed in tapped her musical knowledge to pluck out a line on a small harp. “I felt an affinity with it right away,” she says.

Now the owner of four different folk harps, which vary in size but are smaller than orchestral harps, she has left early music behind to perform traditional tunes and to write her own music. Most harp players are composers, she says; because folk harps are all in one key, almost any combination of notes is a pleasing one. “It’s like having a color palette in front of you,” she says. “You can pick up any of the colors. The tunes just arise.”

With storyteller Diane Edgecomb, her performance partner since 1989, Chamberlain has roamed the musical world mining a variety of sources – including some of Harvard’s knowledgeable librarians – to find traditional music from the many cultures reflected in Edgecomb’s original stories. At their upcoming winter solstice performance at the Arnold Arboretum (Dec. 17 and 18, see page 23 in the Gazette Calendar for details), for instance, they bring the legend of the solstice alive with stories and songs from Jewish, Norse, Greek, Cherokee, and English traditions.

Chamberlain’s other main musical outlet focuses squarely on healing, not entertaining. With GentleMUSES, a project of the Massachusetts General Hospital Cancer Center and the harp department at the Boston Conservatory, she and other volunteers perform “passive harp therapy” at the cancer center to help relax and, they hope, improve the health of the patients there.

“It’s adding to the panoply of things they’re doing to heal people,” says Chamberlain. “There seems to be something about the harp that resonates differently.” Modern science is supporting ancient belief in the instrument’s healing power with research that finds the harp can oxygenate the blood and lower the perception of pain.

While her work with GentleMUSES is strictly therapeutic, Chamberlain describes it as rooted in the same impetus as her entertainment-oriented performances. “For me, the goal of both my performing and playing at the hospital is that at its best, it brings all of us into the present moment, which I think is the most healing experience one can have,” she says. “I think it can open up ways for people to access things inside themselves that they might not have accessed. This is the power of music.”