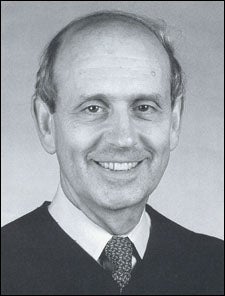 Breyer, who has served on the court since 1994, when he was nominated by former President Bill Clinton, will speak on “Our Democratic Constitution.” As he explained in a phone interview, he plans to focus on those aspects of the Constitution that promote an active, participatory form of liberty rather than simply safeguarding the rights of individuals.

Breyer will look at several controversial legal issues from this perspective, to show that an emphasis on the participatory aspects of democracy can lead to better legal decisions.

“The lectures are designed to demonstrate that the Constitution’s role in creating democratic institutions will help us decide a lot of different kinds of cases that aren’t on their face so obviously about democracy. I’m trying to show how greater emphasis on that feature of the Constitution helps produce better interpretations, in terms of a Constitution that works better for ordinary citizens.”

Breyer, who received an A.B. from Stanford University, a B.A. from Magdalen College, Oxford, and an LL.B. from Harvard Law School, has taught at Harvard Law School and at the John F. Kennedy School of Government, and has been a visiting professor at the College of Law, Sydney, Australia, and at the University of Rome. From 1980 to 1990, he served as a judge on the U.S. Court of Appeals for the 1st Circuit, and as its chief judge from 1990 to 1994.

At the request of a founding trustee of the Tanner Lectures on Human Values, these lectures are dedicated to the memory of Clarence Irving Lewis ’06, Ph.D. ’10, who served on the Faculty of Arts and Sciences from 1920 to 1953.

Co-sponsored by the Office of the President and the University Center for Ethics and the Professions, the series is designed to advance scholarly and scientific learning in the field of human values, and the purpose embraces the entire range of moral, artistic, intellectual, and spiritual values, both individual and social.