Photo and text by Jon Chase 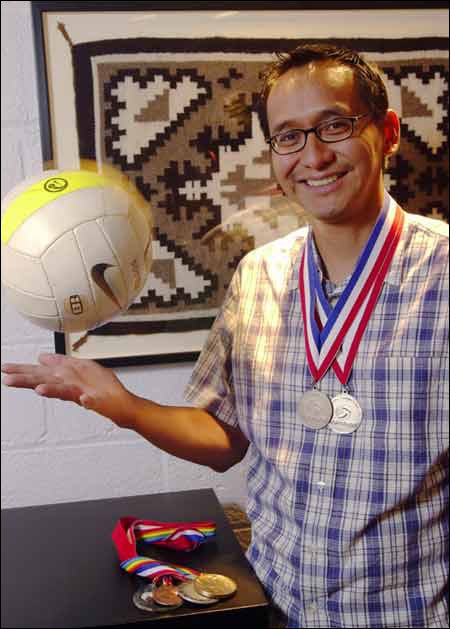 Silver medalist volleyball player, trainer and recruiter of underrepresented minorities in science, committed family and tribal member – full-blooded Navajo Indian Lee Bitsoi juggles all these roles, and does it well. His balancing act is grounded in the Navajo philosophy of finding harmony in one’s life, of paying heed to the physical, mental, and emotional aspects of one’s being.

Bitsoi’s official role at Harvard is director of Minority Training in Genomics/Informatics in the Department of Molecular and Cellular Biology. His more physical side came into play last spring, when Bitsoi became a double silver medalist at the 2004 USA Open National Volleyball Championships in Atlanta. The only Harvard member of a graduate club team from the Massachusetts Institute of Technology, Bitsoi helped his teammates advance to the finals in the men’s A division. Bitsoi plays for fun and exercise, but admits to being competitive. Without the intensity of wanting to win, he says, there would be no medals.

A member of the Navajo (Dine’) Nation, Bitsoi grew up on the Navajo reservation in the Four Corners area of New Mexico. He is a first-generation college graduate, and the first from his hometown community to attend Harvard. All six of his siblings attended college – no small feat for his mother, who quit school after junior high when she was punished for speaking Navajo in class. Says Bitsoi, “It is to my mother and grandmother that I owe the most. I come from strong people.”

Indeed he does. Bitsoi’s grandmother is going on 103.

Maintaining family ties, as well as his native traditions, are important to him; Bitsoi returns home for visits about five times a year.

“I do believe I am helping my people by being at Harvard, so people can see someone like themselves and aspire to be here. Last May, I went back to my elementary school and spoke. I gave the kids Harvard pens, and signed notes on Harvard stationery. They were thrilled. Then I spoke at my high school two days later. I emphasized the need for perseverance, for developing character, of being mindful of our elders, of respecting our identity. I introduced myself in Navajo, and then I spoke in English. Three of my nieces and nephews graduated, so it was a very special day for me.”

And special as well for the Navajo youth who can now dare to trek the rugged trail from Navajo Land to Cambridge, already blazed by a native son.