‘Evening With Champs’ to celebrate 34 years

Harvard researchers have shed new light on how blood clots and say the information can aid the development of better anti-clotting drugs, which are critical to the recovery of patients suffering from heart attacks, strokes, and other ailments.

The Harvard research, conducted at the CBR Institute for Biomedical Research and Department of Pathology at Harvard Medical School, illuminated for the first time the behavior of a molecule called integrin that helps start the clotting process, according to Tsan Xiao, a research fellow in pathology.

Xiao said he hoped the new information would help develop anti-clotting drugs free of the potentially life-threatening side effects that plague some current drugs.

Integrin, found on the surface of a blood platelet, starts the clotting process when a substance called fibrinogen attaches to it. 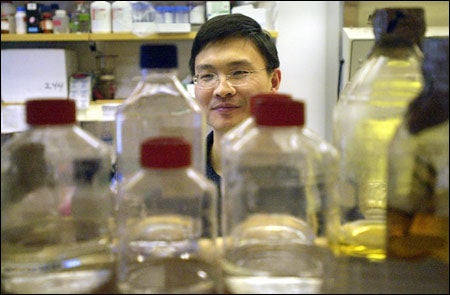 Together, the fibrinogen and platelet form long fibers that create a mesh over a wound. As blood flows out, blood cells get stuck in this mesh, eventually forming a scab.

Controlling how easily blood clots is an important medical goal. Anti-clotting medicines to prevent the development of clots inside blood vessels are used for many procedures, such as inserting tiny tubes called stents to prop open clogged arteries, or angioplasty, a process that clears blocked blood vessels.

Xiao and colleagues showed that integrin, a long ribbonlike molecule, has two positions, resting and active, and described the changes the molecule goes through to reach each position.

“The atomic details of the active integrin were not known before our publication,” Xiao said. “That is very important in understanding the process.”

Current anti-clotting drugs work by causing integrin to move into its active position and then attaching to the spot where fibrinogen normally attaches, blocking the start of the clotting process. It’s kind of like fibrinogen heading into a parking lot where all the spots are already taken by anti-clotting drugs. Fibrinogen can’t park, so clotting can’t begin.

The problem, Xiao said, is that because the drug puts integrin in its active position, it can be recognized as foreign by self-antibodies in a small number of patients, causing an autoimmune response. This can result in the body attacking its own platelets, putting patients at risk for life-threatening bleeding. In addition, these drugs are something of a double-edged sword because they only work at very high doses. At those dosages, the drugs not only block dangerous clotting, but also create a risk for uncontrolled bleeding should patients injure themselves.

With a better understanding of integrin’s structure, Xiao said work can begin on creating drugs that can work on integrin in its resting position, which may be able to avoid some of these dangerous side effects.

“We can hopefully design a next generation of drugs that have many fewer side effects,” Xiao said.