The alpha and omega of Harvard lore 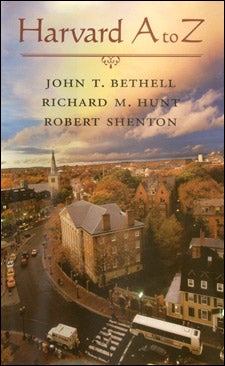 From “Harvard A to Z,” a new book written by former University Marshal Richard M. Hunt, former Harvard Magazine editor John T. Bethell, and former secretary of the University’s governing boards the late Robert Shenton, comes an alphabetized amalgam of Harvard lore. A sampling of factoids appropriate to the commencing of graduates and the gathering of alumni follows:

Alumni: There are currently 255,764 Harvard alumni accounted for by the most recent Harvard Alumni Directory; they live in every state and 184 countries and their median age, in 2000, was 49.

Commencement: Called the “oldest continuous springtime festival in North America,” Harvard’s Commencement began with the first class of nine students in 1642. The exercises, of which today’s is the 353rd, have not been consecutive; they were cancelled on nine occasions due to the plague or Revolutionary War tensions.

Diplomas: Until the 19th century, graduates had to have their diplomas drawn up by a local “engrosser.” They then submitted them, with a fee, to be signed and sealed by the president of Harvard College.

Harvard Crimson: The University’s only daily newspaper was originally a biweekly called The Magenta.

Presidents: Harvard has had only 27 since 1640 and only eight since the Civil War.

Songs and Marches: In addition to the oft-sung (at least this week) anthem “Fair Harvard,” the University has lent its name to a variety of songs and instrumental pieces. Among them: “Harvard Quick Step,” “Crimson Schottische,” the “Harvard Hymn,” and many football fight songs, including “Ten Thousand Men of Harvard.”

Underground: Subterranean Harvard is nearly as complex as the University on the surface, with a labyrinth of steam tunnels, electrical systems, offices, parking, libraries, and the T snaking below ground.

X Cage: These locked repositories of Harvard’s libraries hold explicitly sexual or pornographic works. Widener Library’s X-caged materials are now stored off-site at Harvard Depository and can be recalled but do not circulate.

Z Closet: At Houghton Library, the Z Closet contains artifacts that complement the library’s rare books and other papers, including Charles Dickens’ walking stick and locks of hair from Nathaniel Hawthorn and William Wordsworth.