Families pay the price for 24/7 convenience

Who among us hasn’t appreciated the convenience of filling a prescription at 10 p.m., pleading with tech support when our computers freeze the night before a big deadline, or enjoying a midnight burger at a highway rest stop? As our lives fill to overflowing and families increasingly send two parents into the workplace, we’ve grown accustomed to taking care of business around the clock. Even banker’s hours are no longer sacrosanct; some branches now write mortgage applications following Sunday afternoon open houses.

At a lecture at William James Hall Wednesday (May 19), sociologist Harriet Presser chronicled what she called the understudied impact of our round-the-clock schedules on American families. For the increasing number of employees who deliver these late-night and weekend conveniences, working outside the traditional nine-to-five workday is taking a significant toll on worker health and family stability.

Presser, the Distinguished University Professor of Sociology at the University of Maryland, presented findings from her recent book, “Working in a 24/7 Economy: Challenges for American Families” (Russell Sage Foundation, 2003), detailing who works nonstandard schedules, why, and what it’s doing to their health, their marriages, and their families. With so much focus on the number of hours Americans work, this impact has been largely neglected, she said.

“This trend is … making the home-time structure of the American family far more complex than we’ve acknowledged,” she said. 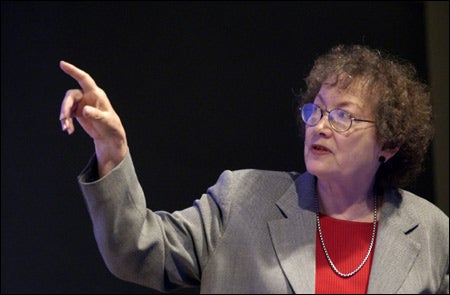 Drawing data from two nationally representative surveys, the Current Population Survey of 1997 and the National Survey of Families and Households, conducted from 1986 to 1987 and from 1992 to 1994, Presser outlined some of the broad macrolevel factors that have resulted in two-fifths of all employed Americans working mostly at nonstandard times – evenings, nights, weekends, or on a rotating shift.

Contrary to what many believe, manufacturing no longer dominates the landscape of working odd hours, she said; rather, it’s the growth of the service economy that has had the largest impact on this shift. Increasing numbers of women entering the workforce have affected both demand and supply: Not only are women disproportionately represented in service occupations, but the drop in women as full-time homemakers has fed the demand for round-the-clock services that better suit their schedules.

From the better-documented effects of sleep deprivation on the health of late-night workers to the nearly invisible – until now – impact on child care, “these changes in the timing of labor force activity affect individual well-being and the temporal nature of family life,” she said.

In her research, Presser paid particular attention to dual-earner couples to gauge the effect of 24/7 work on families. In nearly 28 percent of households where both partners work, one partner – rarely both – works nonstandard hours. “You’re essentially getting a husband who’s leaving for work while the wife comes home,” she said. The percentage jumps to 34.7 percent of two-earner couples with children under 5; they are what Presser calls “split-shift families.”

“That was the one statistic … that started the whole book,” she said. “No one was talking about [the fact that] a third of American couples are split-shift couples with children. It’s incredible to me.” Among the working poor and among blacks, split-shift couples are even more prevalent. And although working nonstandard hours is pervasive throughout the occupational structure – it’s airline pilots as well as cashiers – it is concentrated in the service sector.

Impact on the family

While these split-shift families may reap benefits – a staggered work schedule might eradicate the need for outside child care and its associated costs, for instance – Presser found a correlation between nonstandard work schedules and lower quality of marriages. She was surprised, she said, to discover that the fixed night shift, not the evening shift, has the strongest effect on increasing the odds of divorce. “I think it’s the interaction of sleep deprivation and what it does for adding stress,” she surmised.

Even the potential benefits of child care are offset by concerns for the split-shift couple. They may forfeit sleep to care for children or leave children unsupervised while parents sleep. “It’s not the answer to child care, in my mind,” said Presser. Further, she found that more than half of women who work nonstandard hours rely on two or more child-care providers; the more complex the child-care arrangements, she said, the more opportunities for failure or disruption.

Presser’s call to action was not for a rollback to Ozzie and Harriet times, but rather, for a frank policy discussion of the issues she raises. In the welfare-to-work movement, for instance, “all of the discussion has been on day care, despite the fact that I’ve shown that about half of these women get jobs that are in the evenings, nights, or on weekends,” she said.

She called for a reconceptualization of the American family, noting that what may appear to be an intact family is in fact a split-shift family with very distinct family behaviors. And, as more of us work outside what were once called “banker’s hours,” policy needs to reconsider labor force activities. “Nonstandard work schedules are not really all that nonstandard any more,” she said.

There are no easy answers, Presser acknowledged, but bringing the 24/7 family to the policy table is the only option to addressing the stresses it’s undergoing. “We want 24/7 and that’s not going to change,” she said. “The key question is, are there really clear policy directives regarding helping workers and their families?”