When Harvard University Professors Lawrence Bobo and Michael Dawson formally debuted the new peer-reviewed journal they are co-editing, Du Bois Review: Social Science Research on Race last month at the Organization of American Historians meeting, the reaction was not so much “Why?” as “What took you so long?”

“When Claude Steele got his copy, he said, ‘This is amazing. It should have been here all along,'” says Bobo of the prominent Stanford University psychologist. “A number of people have reacted that way.”

Yet Bobo, the Norman Tishman and Charles M. Diker Professor of Sociology and of Afro-American Studies, and Dawson, Professor of Government and Afro-American Studies, maintain that the journal, with its unique multidisciplinary approach to the intersection of social science and race, is right on time. Du Bois Review, published biannually by Cambridge University Press, represents the coming-of-age of social sciences in the discussion of race and African-American studies. And, the editors hope, the journal will advance this maturing intellectual discourse into full, productive adulthood.

“While the field of African-American studies, to the rest of the world, is 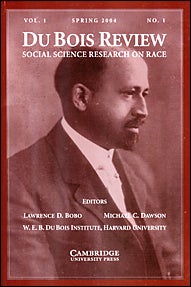 With an ambitious interdisciplinary sweep, Du Bois Review aims to embrace the whole elephant of race in society. Its inaugural issue features research concerning racial and national identity in Cuba, Puerto Rico, and the Dominican Republic; the effect of racial stereotypes on relations between black and white undergraduates at the University of Pennsylvania; an exploration of the racial divide between blacks and whites on the question of apology and monetary reparations, by Dawson and co-author Rovana Popoff of the University of Chicago; and Bobo’s research (with Devon Johnson of the Du Bois Institute) on the gap between black and white Americans’ views on the death penalty and the war on drugs.

Of his and Dawson’s contributions, Bobo says, “This is important enough to us that we will put our own original research here. It is not a boutique outlet, but something that we think ought to be taken seriously in many quarters.”

Further, says Bobo, each issue will take a multidisciplinary approach to multidisciplinary scholarship. Du Bois Review will represent the complex racial terrain of the United States, which is no longer a black-white dichotomy. And the publication itself is structured to include not only new empirical social science research on race but also provocative “big-think-piece” essays and reviews.

The editors believe with passion that the journal will fill a void that yawns wider as more and more social scientists come to prominence with their studies of race. There’s a growing body of intellectual work that, despite its rigor and usefulness, is being overlooked by existing journals, says Bobo.

“I think [Du Bois Review] will be an outlet for work that has had a difficult time finding a home in traditional journals, either because the disciplines have been somewhat reluctant to deal with race … or because the work has been by its nature so interdisciplinary that it’s hard to see its claim on political science as political science, or sociology as sociology,” he says.

Du Bois Review made its Harvard debut Friday evening (April 16), at a reception that recognized the hard work of the Du Bois Institute staff who helped the fledgling journal off the ground. The editors expressed gratitude to Cambridge University Press, which has supported the journal’s launch with marketing muscle, and its advisory board, chaired by Wilson, which Bobo calls “absolutely sterling.”

“You could certainly have a less auspicious start than to be sponsored at Harvard and to have this published by Cambridge University Press,” he says, noting that such a prominent pedigree will help the journal attract top research and, thus, readers.

Bobo, who is acting director of the Du Bois Institute while director Henry Louis Gates Jr., a literary and cultural critic, is on leave, soundly denies the implication that the journal’s creation is a result of the social science mice running havoc while the humanitarian cat’s away.

“I think some people are probably reading it that way: What happened while Skip was away?” he laughs. Rather, he insists, he and Dawson incubated the idea a year ago and have been working – much harder than either anticipated – steadily to secure a publisher and support from their academic colleagues around the nation.

And while Bobo expects and even welcomes controversy the journal and its contents might spark, he believes it reflects positively on Harvard in its pursuit to better understand race and ethnicity.

“Down the road, I hope it becomes a vehicle for changing how we all think about and engage race,” says Bobo.