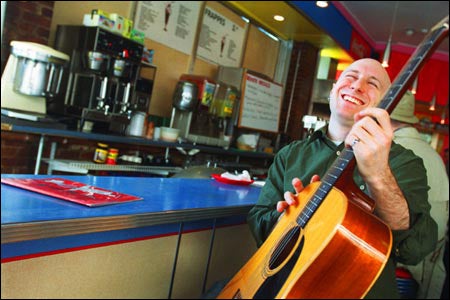 After six albums and years touring the country on the folk circuit, Russell Wolff’s music means a lot to him. But a serious illness over a year ago gave Wolff new perspective.

He’s enjoying his music more, for starters, and putting worries about a career in music on a back burner. From his day job in computer support at Harvard Medical School, Wolff is also pursuing his newfound desire to complete his bachelor’s degree, taking classes at Harvard Extension School.

On the contrary, Wolff is about to release a new album with a new band, both named BIGGER THAN BRITNEY.

“Music to me, in a word, has been survival,” Wolff said. “It’s been my best friend. It’s always been with me. It’s never let me down, audience or not.”

Wolff’s catchy, quirky music has been classified as folk, but Wolff said it’s really more alternative-pop, and lately he’s been writing songs that have more of a pop feel to them.

“One thing that has changed is I just don’t have the patience with music that doesn’t get to the point,” Wolff said. “Pop gets to the point.”

When he writes, Wolff said he’s never quite sure how a song is going to come out.

“I don’t think when I write. I do it subconsciously,” Wolff said. “Nothing’s there on purpose but nothing’s there by accident…. It’s fun music, for people just like me.”

Wolff’s health tribulations started just before Thanksgiving 2002 when he felt a lump in his neck. The lump grew until he began to have trouble breathing. Doctors eventually identified a peritonsilar abscess. It wasn’t long until the streptococcus A infection had spread through his neck and into his head and chest.

After emergency surgery and the insertion of a tube in his trachea to help him breathe, Wolff was hospitalized for almost four weeks and recuperated at home for another month.

Wolff nearly died during the ordeal, and even after that, there was a chance he wouldn’t be able to talk or sing again. He said it took almost a year for him to recover his usual energy level and he seems now ready to make the best of that.

In addition to work and school and recording, Wolff said he’s ready for a summer of touring folk festivals, where the fans know his music.

“I don’t want to close the door on music or on school,” Wolff said. “I find the longer I’m at this life thing, the more projects I take on.”