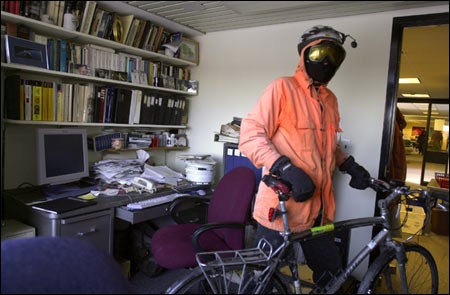 It’s 5:30 on a windy January night, and around Harvard Square, pedestrians strain against the cold, counting each excruciating step to their destinations, their scarves and mittens and the bulkiest of coats providing scant protection from the free-falling temperatures. Suddenly, from the direction of Concord Ave., a bright orange figure slices through the chill – on a bicycle.

One word springs to mind.

Doug Mink, a bicycle commuter and software developer at the Smithsonian Astrophysical Observatory of the Harvard-Smithsonian Center for Astrophysics, simply shrugs.

“I don’t have a parking space,” says the dedicated cyclist who has cycled the nearly 20-mile round-trip trek from his home in Roslindale every day this winter. He waxes prosaic, not heroic, about his ride, which takes him along off-road bike paths through the Arnold Arboretum, the Emerald Necklace, and up the Charles River, some of the city’s most scenic corridors. “I just love going through the Arboretum. There are days when I go through and I don’t see anybody else,” he says.

Mink’s attitude about biking through this winter’s record-shattering cold may be casual, but his gear is not. He carries three layers of gloves for varying conditions, wears skiing goggles and long underwear, and ties the hood of his blaze-orange jacket (“It stands out against the snow”) beneath his helmet. Several weeks ago, when early evening temperatures were already subzero, Mink stopped in Harvard Square to add a neoprene face mask to his outfit. “Below zero, it’s really better to cover up everything,” he says, adding that dressing for winter cycling means striking the delicate balance between the frostbite-inducing temperatures outside and the body heat generated by the effort of biking.

Bicycle commuting has been a way of life for Mink for nearly 25 years, and since his carpooling duties have decreased in the past two years, he estimates he’s only driven to work a handful of times. Not surprisingly, he’s also active in several bicycle advocacy efforts, working to link the state’s various bicycle trails and maintaining the Web site of the Massachusetts Bicycle Coalition (http://www.massbike.org). He’s outspoken about bicycling as a health benefit and as a viable option to those short jaunts many of us make in our cars. “I’d like people to consider the impact of their transportation choices,” he says.

Yet he soft-pedals advocacy for his own preference for all-weather bicycle commuting. “I think people should try [biking in winter], but if you don’t like it, go out in nicer weather,” he says. He acknowledges that snow (manageable), cold (more difficult), ice (the worst), and traffic (“bicycling in Boston traffic isn’t really more scary than driving in it”) are legitimate, if surmountable, concerns of would-be cyclists.

But when Mink zips along the frozen Charles River, he’s likely wearing a smile beneath his goggles and face mask. “When you’re on a bike, you’re really experiencing winter. That’s the best thing about it,” he says. “It’s all around you.”