Chants of “China lie! People die!” and “Hands off Taiwan!” echoed across Western Avenue in Allston Wednesday (Dec. 10) as about 85 demonstrators sent a message to Chinese Premier Wen Jiabao to improve human rights, stop sabre-rattling over Taiwan, and get out of Tibet.

The demonstrators, who represented several groups, staged a peaceful protest along Western Avenue that may have never even been heard by Wen, who entered the campus by another route and who left after many of the protesters had dispersed. Wen delivered a speech at Harvard Business School Wednesday morning.

Though the protests were peaceful, Boston and State Police were taking no chances. They were present in force, particularly for Wen’s exit, when police on foot lined the intersection of Storrow Drive and Western Avenue, backed up by more than a dozen mounted police.

Several Harvard students and faculty were among the demonstrators. Chieh-Ting Yeh, a senior from Kirkland House, joined the protests against China’s policies on Taiwan. Tensions have been raised recently by the Taiwanese president’s support of a referendum to condemn the buildup of Chinese missiles aimed at Taiwan.

“We want to tell him [Wen] to stop bullying Taiwan,” Yeh said.

Tun-Hou Lee, a professor of virology at the Harvard School of Public Health, leveled some criticism at U.S. President George Bush. During Wen’s visit to Washington on Tuesday, Bush criticized Taiwan over the referendum. Lee said it’s ironic that Bush, who has led the charge for freedom in Iraq, is siding with totalitarian China against democratic Taiwan.

“The fact is that China needs to change; the pressure on Taiwan is misplaced,” Lee said.

Members of Boston’s Tibetan community called for China to release political prisoners, including Tibetan Buddhist leader Tenzin Delek Rinpoche, who was sentenced to death for alleged involvement in a series of explosions. They also called on the Chinese government to start serious talks with the Dalai Lama and the Tibetan government in exile about the future of Tibet. 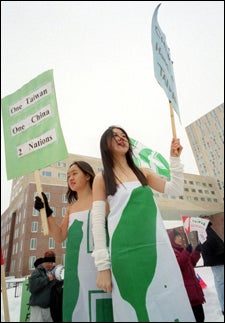 “We are not here to make him angry, but to give him a message,” said Ngawang Sherpa, president of the Tibetan Association of Boston.

Falun Gong demonstrators adopted a non-confrontational strategy, hoisting a banner that welcomed Wen. Members of the group have been arrested, tortured, and imprisoned in China during a government crackdown over the last few years. Members demonstrating Wednesday attributed the crackdown to both the group’s philosophical beliefs and its popularity.

Haiying He, who worked as a researcher at the Dana Farber Cancer Institute for six years, said his brother, a Chinese doctor and a Falun Gong practitioner, was recently sent to jail for 10 years. His mother and sister, who also live in China, were put in labor camps for a year and a half.

“They have a belief other than communism, and that’s a threat,” He said.

The anti-China demonstrators were eventually joined by a counter-protest bearing banners welcoming Wen. That group was made up of about 40 members of the International Association of Yan Xin Life Science Technology. Jianyuan Wang, coordinator of the demonstration, said the group, made up largely of scientists, supports the Chinese government.