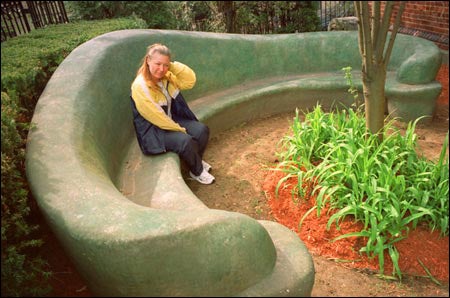 Twenty-five years ago, when she was just 18 years old, Cindy Huff had a stroke that paralyzed her right side and left her unable to talk, read, or write. Feisty and focused, Huff, a server in Adams House for Harvard University Dining Services (HUDS), re-learned speech and literacy skills, then added driving, sewing, playing pool, and skiing to her curriculum.

“I was determined,” says Huff of learning to ski, relating three years of slopeside tumbles before she finally gained mastery. “Nothing was going to stop me from learning.”

At the end of June, the unstoppable Huff, who still does not have full use of her right arm or leg, will tackle another challenge. With her sister, Gail, a reporter for WCVB-TV, Huff will walk half of the Kona Hawaii Marathon to raise money for the American Stroke Association (Gail will go on to run the next 13.1 miles).

Training since January, Huff has logged miles with Gail, with a training group from a Boston health club, and on her own. Her longest trek took her from her home in Acton to Kimball Farms and back, with a stop midway to call another sister, Jennifer, for encouragement.

“She was my – whatchamacallit – my rah-rah-rah,” says Huff, who speaks slowly and improvises when the precise word she seeks eludes her.

With her left leg carrying most of the load, it now squeezes at the seams of the flowered pedal pushers Huff made. “This one’s about ready to come out of my jeans,” she says, patting her impressively muscled left thigh.

The Huff sisters have met their $10,000 fundraising goal – “We’ve got it all under control,” says Cindy – thanks, in part, to Huff’s colleagues at HUDS, where she’s worked for 21 years. Students at Adams House held a bingo night that brought in almost $400.

Some of the funds cover the sisters’ expenses, but most of the money goes to the American Stroke Association. “I wanted to give something of myself back to the Stroke [Association],” says Huff. The stroke that felled her at an unusually early age was due to a genetic blood disorder; Gail, too, had a close call with the condition about 14 years ago.

With fundraising behind her, Huff can focus on continued training. She seems surprised, albeit pleased, at her own progress.

“I thought four miles was a lot, and now I’m up to 9.2,” she says. Although she hasn’t been clocking her walks, she anticipates the 13 miles taking her about four hours.

“I’ll get there when I get there,” she says with a laugh. Along the way, she’s happy to inspire others with her story of recovery from stroke.