The people of New Mexico’s Mimbres River Valley lived a thousand years ago in small villages up and down the river.

They successfully farmed corn, beans, and squash until they disappeared abruptly around 1150 A.D., along with many other people living in the Southwest at the time.

While ordinary in many ways, the Mimbres left behind an extraordinary gift: hundreds of elaborately decorated bowls, with striking geometric designs and images of warriors, animals, and tools, and with combinations of both.

The bowls, first excavated during the summers of 1924 to 1927 by Harriet and Burton Cosgrove for the Peabody Museum, are again on display at the Peabody.

The exhibit, “Painted by a Distant Hand: Mimbres Pottery of the American Southwest,” opens Thursday (May 29) at 5:30 p.m. with a reception and lecture by LeBlanc at Harvard’s Yenching Institute auditorium, followed by the official opening at the gallery. 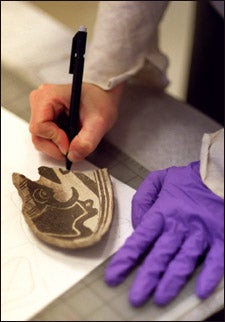 LeBlanc, who has done previous work on the Mimbres pottery, has written a book based on the exhibit, scheduled to be published in 2004.

Though the people are long forgotten, their artwork lives on, in widespread creations of modern Native American artists who discovered the Mimbres’ work through the Cosgrove’s publications.

“You can’t go anywhere in the Southwest, from hotels to postcards to pottery, without running into Mimbres designs,” LeBlanc said.

LeBlanc said the Mimbres were a typical Native American people of the time and probably never numbered more than a few thousand. Their architecture, culture, and lifestyles were fairly ordinary. Even the quality of the pottery itself was nothing special. In fact, LeBlanc said, the decorated pottery was of a lower quality than the typically undecorated ware used in cooking.

“It’s what they did with the underlying repertoire [of designs] that’s so interesting,” LeBlanc said.

LeBlanc said the bowls were likely used for serving, rather than cooking food, as none have been found with cooked-on food remains. They appear to have been extensively traded, but he doesn’t believe the bowls were merely elaborate containers in which food was carried from place to place.

“We don’t think it’s the [equivalent of the] tin can. I think it’s the fine china and that for day-to-day [use] they didn’t take it off the shelf,” LeBlanc said.

LeBlanc said the Cosgrove’s initial excavation was the first thorough work done on the Mimbres people and their pottery. Harriet Cosgrove’s subsequent book, with drawings of more than 700 Mimbres bowls, not only became the standard reference on the subject, it also inspired artists across the Southwest.

The pottery’s images depict some aspects of the Mimbres’ life. But LeBlanc said so much remains unknown that the figures could be from everyday life or from their cultural mythology or from their religious beliefs. Similarly, unique patterns could have some symbolic importance, or they could just result from the artistic license of the individual potter.

LeBlanc said he’s convinced some of the bowls’ creators were making visual jokes, perhaps associating words or sounds in their language to create images that elicit a chuckle when seen.

LeBlanc’s latest work includes trying to detect individual hands among the many bowls and designs. One of the last display cases in the 100-bowl exhibit includes several groups of bowls that LeBlanc believes are the work of the same artist. One group includes turtles that all have toothed jaws arranged vertically between the eyes and another group features animals whose tails all resemble that of the peacock, whether on bird or dog or other animal.

The exhibit includes a display where visitors will be asked to decide for themselves the significance of particular designs. One, a rotund ghostly figure whose head has only eyes, is found on several bowls and epitomizes the enigma of Mimbres pottery.

“Is this the creation of one person [making several bowls with one design] or is it the case where everyone knows the story – like the Wizard of Oz – and everyone draws it?” LeBlanc asked.

An opening reception for ‘Painted by a Distant Hand: Mimbres Pottery from the American Southwest’ – the Peabody Museum’s exhibit of more than 100 prehistoric painted bowls made by the pre-Pueblo farming people – will be held today (May 29) at 6 p.m. On view through Sept. 30, the show features some of the most artistic of all the ancient art traditions of North America. Also on display are associated objects, such as textiles, sandals, baskets, axes, and trade objects fashioned of shell and stone.