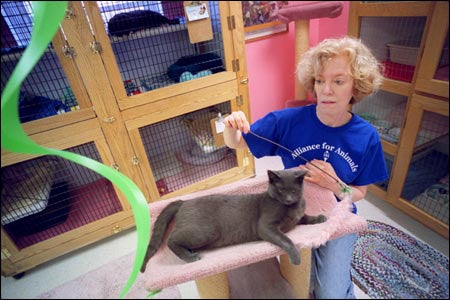 Love makes it hard for Janis Forde to do what she does. It’s also what keeps her at it.

It’s a love for cats that makes her spend weekends in the woods, monitoring feral cat colonies, deciding which individuals she’ll trap, take to a veterinarian for sterilization, and then release back to the great outdoors.

But Forde, a staff assistant at Harvard Law School’s Stewardship Department, is a woman on a mission, so she’s undeterred by the difficulties in addressing one of society’s forgotten problems.

“I find it very difficult to put cats out in the wild but at least I know that the cats won’t have another generation of kittens,” Forde said.

Feral cats abound in Massachusetts and across the United States, Forde said, citing one estimate of 1 million feral cats in Massachusetts alone. Forde works with two organizations active on the issue, Alliance for Animals, where she volunteers in their Arlington no-kill shelter and adoption center, and the Merrimack River Feline Rescue Society, with which she traps, sterilizes, and releases.

Feral cats originate as strays or as throwaways left by people who don’t want them. After living years in the wild and breeding, they and their offspring are wild and (particularly the adults) pretty much untameable.

The cats, Forde said, congregate into colonies, usually near a food source. Though some do occasionally catch wild prey, most live off of trash in dumpsters or from food left by people.

Forde is part of a small community of animal lovers doing their best to deal with the problem. Though they oppose efforts to exterminate the animals for humane reasons, Forde said there’s a practical reason to employ other strategies. Killing members of a colony, she said, doesn’t stop new cats moving in, since colonies are usually located near food sources.

So Forde has joined a small cadre of people who have come to believe the best thing to do is to leave the cats in place, but to spay or neuter them. This not only keeps the problem from growing, it also ensures the individuals, spared from the conflict of mating and the rigors of parenthood, are healthier.

Forde acknowledges this solution is not ideal. But feral cats, she said, are a much larger problem than most people think – if they think about it at all. Consequently, the problem attracts very little attention – mostly from volunteers – and even fewer dollars.

“I think the best thing I can do is to prevent unwanted litters,” Forde said. “If I had money [to open] a sanctuary for unwanted cats, I’d do it.”