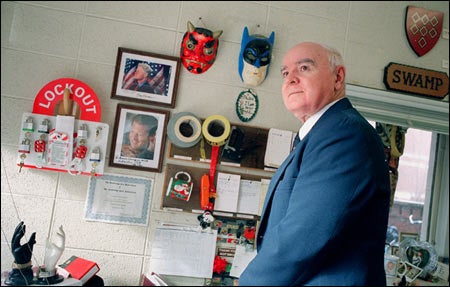 He has a room named after him. And a cajun-spiced burger in the cafeteria. But Ronnie Levesque isn’t a movie star, a rock singer, or any other kind of celebrity. He’s the superintendent of Quincy House.

Levesque has earned respect from those he works with through years of service. Overseeing a crew of four custodians at Quincy House, Levesque helps ensure the lights stay on, the furniture stays fixed, the keys fit the locks and, important for this time of year, the heat is working. In 1998, he won the Faculty of Arts and Sciences’ Administrative and Professional Prize, given to outstanding administrators.

Levesque has a long history at Quincy House. He became superintendent in 1974, 28 years ago. Over those years, Levesque said he’s come to really enjoy his work. He likes the activity, the students, and the unusual things that happen at a place like Harvard from time to time. He gave as an example the ultratight security over the summer of 1984, when Olympic soccer players from eight nations – including Iran and Iraq – stayed at Quincy House while preliminary games were played.

He’s had to deal with his share of headaches – like the time graduating seniors left him sand from a farewell luau in one of the common rooms for a sandbox they knew he was building for his daughter. When he went to collect the sand, though, he found it not in bags, but spread all over the common room, complete with plastic pools filled with water and small trees sticking out of the sand.

It took hours to clean up the mess, Levesque said.

Levesque has stepped up when emergency strikes. The Levesque Room has a plaque on its wall honoring Levesque’s heroism during a 1986 fire when he went looking for students who might have been still inside the building. He wound up getting treated for smoke inhalation, but luckily, it was over winter break and there were no students inside.

Levesque’s day starts at around 7 a.m. when he comes in and checks the master keys in case some were taken overnight for a locked-out student. He then checks the day’s work orders and gets cracking. Even after 28 years, Levesque still likes his job and has no plans to go anyplace – although he enjoyed his visit to his new grandson, Brett, in North Attleboro over Thanksgiving.

“I feel good,” Levesque said. “I’m happy because I think I do a pretty good job.”