*1. Pertaining to or caused by a flood or deluge

Banished from the Garden of Harvard

Anticipation and exhaustion mingled among the soon-to-be graduates as they squeezed into an airless Memorial Church for Commencement Day’s first event, the senior class chapel service. For some of the sleepy students, this may have been their first personal experience with the other 8 o’clock that occurs daily.

The Rev. Professor Peter J. Gomes, the Plummer Professor of Christian Morals and Pusey Minister in the Memorial Church, kept his remarks brief and light, comparing this visit to the church – the first for some in the congregation – to seeing the Glass Flowers at the Harvard Museum of Natural History. “Everyone should do it at least once,” he said.

Poking fun at Commencement clichés, he told students “It’s not who you know, it’s whom” and “it never rains on a Harvard Commencement.”

In his slightly more serious address, Gomes called Adam and Eve’s banishment from the Garden of Eden the first commencement.

“This hired academic regalia from the Coop [is] your fig leaf, beneath which you are naked,” he said.

The rain, which apparently had not gotten the news that Harvard Commencement enjoys perpetual immunity from its visitations, proved vexing to nearly all members of the Tercentenary Theatre crowd, but to one older gentleman in a broad-brimmed Stetson hat, the abundant moisture seemed downright fascinating.

“I sure wish we could send a few billion gallons of this back to Yuma,” he said, staring down at the mud and sodden grass blades between his elegantly tooled cowboy boots.

“I heard New England had a drought of its own, but it sure don’t look like it today,” said the gray-haired woman by his side.

The couple introduced themselves as Dwight and Lucinda Johnson, wheat farmers from northeastern Colorado who had come to Harvard to see their grandson graduate.

“We almost couldn’t make it out here,” Mr. Johnson said. “The winter wheat crop’s only about half what it should be. Farmers have lost about $100 million statewide. Worst it’s been since 1969.”

“Nothing was going to stop us from seeing our grandson get his Harvard diploma, though,” said Mrs. Johnson. “Not even if we had to get in the four-by-four and drive here.”

Asked if their grandson was planning on taking over the family farm, Mr. Johnson shook his head.

“No, he’s more inclined in the artistic direction. Ended up majoring in something with a funny name to it. I think they call it VES.”

Though it was dark and stormy on the brightest of days in Harvard’s academic year, some students – apparently possessing an inner warmth to get them through the drenching rain – said they waited too long for this day to leave before the ceremony was over.

“I think it’s really important, just the principle of staying through the whole thing,” said a drenched and umbrella-less Jamie Bankert, who graduated from the Graduate School of Education. “I’m proud of everyone in this theater and everyone who got their degrees, including the honorees.”

Bankert said he didn’t bring an umbrella because he thought it would obstruct the views of those behind him, but took small consolation in the protection offered by the mortarboard.

A trio of master’s degree recipients from the Graduate School of Arts and Sciences – Scott Schnee, Chris Wagner, and Ryan Beasley – joined Bankert and the hardy remnant still seated at the Morning Exercises’ end.

“You really earned your degree if you stayed here,” Wagner said.

The colors of Harvard

Adding to the Harvard crimson on display during Commencement Exercises were the multicolored forest of umbrellas that popped out as the rain began to fall. Plain black umbrellas may have been in the minority, as different shades of blues, greens, and reds – not to mention flower patterns and artsy designs – added color to the display.

The only problem with the forest of umbrellas was that they grew mobile after a while and began to float toward the exits, heading for the shelter of nearby buildings where the ceremonies were being displayed on television screens. 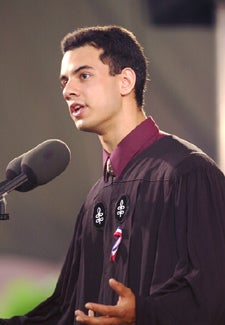 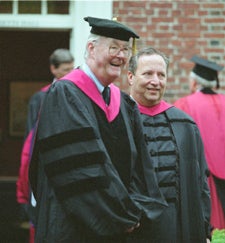 Zayed Yasin’s controversial Senior English Address was met with far more applause than protest, but the rain, which progressed from polite to pouring through his speech, forced a walkout of many well-wishers.

Protected only by his reunion windbreaker and Harvard umbrella, Arthur Hartman ’47 would not be lured to the dry comfort of Sanders Theatre or the Science Center.

“I just enjoy this sort of thing,” said the former president of Harvard’s Board of Overseers. “The speeches are good, the music’s good, and it’s great to see the excitement of all the youngsters and their parents.”

“It was a great speech, and well-spoken,” he said. “It’s about time somebody said something sensible about Islam.”