By Photo and text by Justin Ide 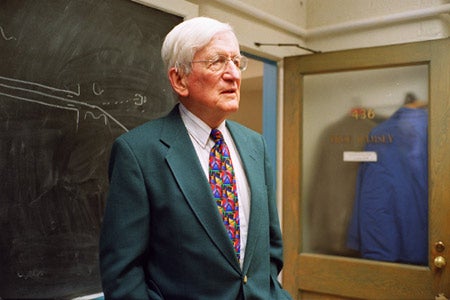 For most of us, time slips by in increments of days, hours, and minutes, measured by the tick of a second hand or the yawn at a meeting. But for Norman Ramsey, the Higgins Professor of Physics Emeritus and one of the developers of the atomic clock, time is measured in the tiny movements of atoms and a second is defined as the time it takes a cesium atom to make 9,192,631,770 oscillations.

Born in 1915, the son of a West Point graduate, Ramsey, like many military kids, moved around a lot. Despite his peregrinations, Ramsey excelled in his studies, graduating from high school at the tender age of 15. Too young to follow his father’s footsteps into West Point, Ramsey entered Columbia College in 1931.

At first, Ramsey concentrated in engineering but soon switched to mathematics. He writes in a short autobiography: “My early interest in science was stimulated by reading an article on the quantum theory of the atom. But at that time I did not realize that physics could be a profession.”

After graduating with distinction from Columbia, Ramsey took off to England, where a fellowship allowed him to study physics in earnest.

Working with some of the best and brightest physicists of the time, Ramsey secured his second bachelor’s degree. Returning to Columbia, Ramsey studied with I.I. Rabi, inventor of the technique known as magnetic resonance, by which the natural resonant frequencies of atoms could be measured. Rabi won the 1944 Nobel Prize for his work.

During World War II, Ramsey, like many of the top scientists of the day, worked on military projects that changed the course of history. Initially he worked as a radar consultant to the Secretary of War before, in 1943, moving to Los Alamos, N.M., to work on the Manhattan Project.

In 1947, Ramsey moved to Harvard – and never left. In 1989, he won the Nobel Prize in physics for developing a method of measuring differences in atomic energy levels called the separated oscillatory field method. He also helped improve techniques for studying atoms, which led to the development of the cesium atomic clock. Practices directly related to Ramsey’s work have been used to test theories such as relativity and other basic theories governing our universe.

Fit and healthy with a bright head of white hair, Norman Ramsey continues to come to his Harvard office regularly. Though he officially retired in 1986, he still makes good use of time – writing, publishing, and lecturing about his lifelong love, physics.