From National Public Radio to pierced teenagers in the yarn store, everyone knows that knitting is suddenly cool. It’s the “new yoga,” says one magazine article; it’s part of a post-Sept. 11 trend toward cocooning, say psychologists.

In the basement of Harvard’s Loeb House, seven women surrounded by plump skeins of yarn and half-finished sweaters shake their heads in disbelief. “I’m amazed to find myself part of something that’s hot,” says Diana Stewart, who recently returned to knitting after a 60-year hiatus.

Stewart, former co-master of Lowell House, and her fellow knitters are members of Harvard Neighbors’ newly formed knitting group. While no one admits that they were drawn to the group by knitting’s newfound hipness, they’re not surprised that the centuries-old craft is gaining in popularity.

“Other people take Prozac, then there are those of us who just knit,” says Jennifer Kotilaine, associate secretary to the University and leader of the knitting group. Between bites of her lunch, Kotilaine surveys a bear-sized pullover she’s knitting for her husband. He’s so tall, she says, that she needs to purchase more heathery gray wool to lengthen the sweater’s arms. 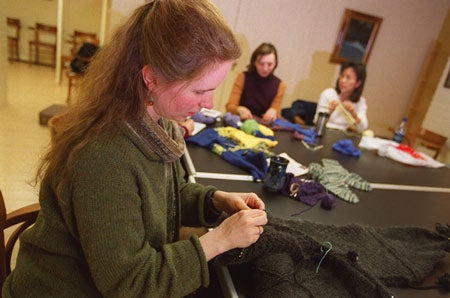 At the other end of the spectrum, Lillian DeBacker and Carolina Carbó show off small yellow squares; both are new knitters practicing their stitches before graduating to a real project. Ina Luch pieces together a tiny cardigan she knit from yarn scraps donated to the group; in turn, she plans to give the sweater away, possibly to a local children’s hospital.

From teaching newcomers to sharing yarn and swapping patterns, a spirit of generosity runs through knitters. The group plans to take on a charitable project – perhaps knitting newborn hats for a hospital – once all members master the basics of knit and purl.

Stewart witnessed knitters’ generosity firsthand when a group she was involved with, the Women’s Commission on Refugee Women and Children, collected 32 tons of yarn from knitters around the country for women in the former Yugoslavia several years ago. The yarn was needed not so much so women could create garments to sell, says Stewart, but because trauma experts found that knitting encouraged women to talk to each other about the horror of war, thus healing their emotional scars.

On the peaceful edge of Harvard Yard, Harvard Neighbors’ knitting group similarly connects its members with conversation and camaraderie. For Luch and Carbó, from Germany and Argentina, respectively, it’s a low-key way to brush up their English skills. They, along with DeBacker, are all wives of recently transplanted researchers; the casual gossip and friendly chatter of the knitter’s group helps them find their way in the Harvard community.

New friends, English lessons, handmade sweaters … try getting all that from yoga class.