By Photo by Stephanie Mitchell Text by Beth Potier 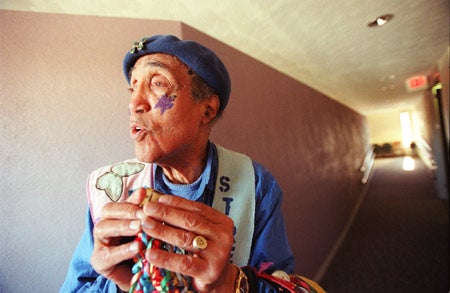 “I’m the man with the blue guitar. Picasso tried to paint me in Paris but he never got my soul.”

When Brother Blue speaks, words tumble out in a messy, evocative, inspired stream. It’s as if the well-known storyteller, street performer, and man-about-Cambridge is channeling God, Shakespeare, and James Brown simultaneously. Tambourine in hand, harmonica in pocket, the beribboned, butterfly-festooned Blue is a one-man multimedia show – a whirl of riffing, rhyming, finger-snapping, foot-stomping prose. “They say I’m the greatest in the world and I probably am,” says this modern griot without a trace of modesty.

Before there were poetry slams, before rappers ruled radio, there was Brother Blue. Blue, aka Dr. Hugh Morgan Hill, has been a familiar figure in Harvard Square since he took his stories to the streets in 1968, two decades after graduating from Harvard College. He’s been telling stories around the world ever since, creating original tales and borrowing from other cultures. He met Mother Teresa at the United Nations Habitat Forum, he spun “King Lear” on New Orleans’ Bourbon Street at midnight, he told 500 stories in a 72-hour marathon at Boston’s Emmanuel Church, he entertained business travelers over the intercom on a flight into Boston.

Blue’s wife Ruth, who works on oral histories at Radcliffe’s Schlesinger Library, acts as his anchor and agent, reeling him in as he rambles and keeping a close watch on his appointment book. “We’re like a pair put together by heaven,” he says. “She’s my angel. Without her I could do nothing.”

Brother Blue’s stories have the spiritual grounding one would expect from an ordained minister. “Storytelling is praying out loud. It’s sacred work,” he says. Stories can overcome hatred and killing with their power to create understanding, he says. “I live for one thing,” says Brother Blue. “To heal this broken world.”