The role of the United States on the world stage remained the top concern of students who met with former President William Jefferson Clinton at the ARCO Forum immediately following his address at the Gordon Track and Tennis Center Monday afternoon (Nov. 19). The question-and-answer session was open to approximately 400 students, faculty, and staff from the Kennedy School of Government and undergraduate students who are active in the Institute of Politics, which hosted Clinton’s visit to Harvard.

Joseph S. Nye Jr., dean of the Kennedy School of Government, moderated the conversation, reminding the students who eagerly anticipated querying the former U.S. president that “there’s only one speech today” and that questions should be brief, “end with a question mark, and come one per customer.”

“I think we should have done even more than we did … to promote what is disparagingly called nation-building … to increase the capacity in countries to make progress themselves,” he told a student who asked for his hindsight on his administration in light of the recent terrorist attacks. “We should have engaged more openly in debates about what people’s real beefs about America are.”

Still, said Clinton, “It’s more fruitful to think about what we should do going forward.”

In one of the event’s more impassioned moments, Clinton said that tensions between the United States and Muslim nations have been exacerbated by the fact that the average Egyptian, Palestinian, or Pakistani is unaware of America’s defense of Muslims over the years. “We have done a lousy job of getting our story out,” he said, citing U.S. action in Bosnia. “I did not think enough about the public diplomacy aspect of this throughout the Muslim world.”

He recommended a broad public relations campaign that would utilize the media and Arab-speaking spokespeople in Muslim countries to present a clearer picture of United States policy and help “tell them what the deal is,” he said. “We don’t need to overly propagandize,” he said, acknowledging that many Muslims will always find the American way of life too extravagant for their values. “All we’ve got to do is get the truth out.” 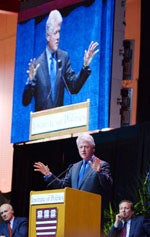 To a freshman who asked if civil liberties should ever yield to public security, Clinton responded with a firm “yes.” He then drew a line between inconveniences, recalling how airline travelers grumbled when metal detectors first became necessary at airports, and the abridgement of civil rights, such as arresting and detaining suspects for long periods of time without prosecution. Such dramatic suspension of civil rights should not be tolerated, he said.

An even more effective means of combating terrorism is already in widespread use in the private sector, he said, reiterating a point he made in his earlier speech. He recommended that the government employ the legal means used by direct marketing companies to collect information and track potential terrorists.

The policy-savvy audience got a glimpse of the nuances and sophistication of presidential politics, as Clinton defended and discussed his administration’s policies regarding official recognition of the Armenian genocide, support of Greece’s oppressive dictatorship and of the nondemocratic Saudi regime, and the Palestinian-Israeli peace process.

He told a sophomore that while he is confident that the United States will remain a world superpower, it would likely be joined in several decades by the European Union and perhaps China or India. Speaking in support of U.S. intervention in world affairs, from peace in the Balkans to tribal wars in Africa, Clinton said that we should utilize the country’s unique position as a superpower to promote peace and democracy, even if success is not guaranteed. “Given what’s going on in the Muslim world, we need to get caught trying. It doesn’t matter if we don’t get what we want,” he said.

Clinton seemed relaxed, perching talk-show style on a stool and making light of faulty equipment. “You need to let the Harvard football team work on the microphones,” he quipped.

Yet his engagement with students was serious and genuine, his response to their questions thoughtful. He extended his visit to the Forum, cutting short a private reception with President Lawrence H. Summers to field an extra query. Both the former president and the many students with unanswered questions seemed sorry for the session to end.