Stars on a Summers night

New president is treated to dizzying array of student talent 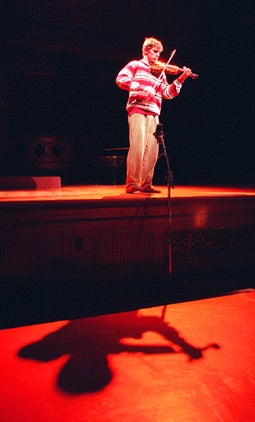 The stars of Harvard’s creative firmament shone Thursday night, Oct. 11, in “Segue! … A Celebration of Students and the Arts,” the first official event of the Inauguration of President Lawrence H. Summers. A dizzying array of orators, dancers, and musicians took the stage of Sanders Theatre in a seamless showcase of Harvard talent.

As the invited audience entered the theater, the Harvard-Radcliffe Orchestra performed on the lawn north of Memorial Hall. Inside, the Harvard Jazz Combo and Harvard Baroque Chamber Orchestra provided more preperformance entertainment. Backstage and downstairs, nervous students primped and tuned. “I’m looking forward to having it over with,” admitted fiddler Gabe Jostrom ’04.

As lighted stars danced across the Sanders stage, the Choral Fellows sang “The Star Spangled Banner” from the balcony above. Also on high, the Herald Trumpets performed Leroy Anderson’s “Woodbury Fanfare” from the catwalk above the highest seats in the theater.

If “Segue! …” aimed to demonstrate the breadth and diversity of arts at Harvard to Summers and his guests, it hit the mark. Violist Nokuthula Ngwenyama M.T.S. ’02 thrilled with the playful, passionate virtuosity of Fritz Kreisler’s “Praeludium and Allegro,” which Jostrum followed with a medley of fiddle tunes from Irish and American folk traditions, rendered with equal skill and soul.

Musical inspirations ranged from the vocal works of Mozart and Robert Schumann, interpreted beautifully by soprano Lara Marie Hirner ’04 and bass-baritone Neil Davidson ’03, respectively, to those made popular by Whitney Houston and the band Extreme. Tom Lowe ’05, a veteran of musical theater, commanded the stage with his powerful performance of the ballad “One Moment in Time.” The Glee Club Lite stripped Extreme’s pop hit “More Than Words” down to vocalized bass, rhythm, and soaring falsetto.

Collegium Musicum Chamber Singers, a Renaissance choir, sang Brahms, and the Kuumba Singers, the largest ensemble to take the stage, connected the dots between contemporary gospel and its African roots with Kirk Franklin’s “Be Like Him.” Musical globe-trotting took the audience to India with a trio of vocalists from Taraana, Harvard’s South Asian music group, and to Spain with the classical guitar of Extension School student Francisco Antonio Isaza.

Harvard’s Puritan forefathers may have frowned on dancing, but that sentiment did not linger in the evening’s expressive, jubilant dance performances. The Crimson Dance Team, a competitive dance group, pirouetted and leapt with jazzy, precise athleticism to a medley of Janet Jackson tunes. An excerpt from “Into Emptiness,” choreographed by Ryuji Yamaguchi ’03, signaled an abrupt change in mood, as three men morphed forms in a slow, gymnastic contemplation to music by Arvo Pärt.

The choreography of “Still Rising,” for a dozen female dancers, nodded to the African influences of Alvin Ailey (at whose school choreographer Shelby Braxton-Brooks ’03 studied) and the accompaniment of vocal ensemble Sweet Honey in the Rock. The Gumboots Dance Troupe looked to the mines of South Africa for their performance of the exuberant shouting, slapping, and stomping of that tradition.

Orations bookended the performances. The evening opened with Shakespeare’s “Sonnet 15,” read by Emily Knapp ’03. In closing, Harvard-Radcliffe Dramatic Club president Cary McClelland ’02 read from William Faulkner’s address on receiving the Nobel Prize for literature. McClelland finished with Faulkner’s fitting tribute to the power of the arts: “The poet’s voice need not be merely the record of man, it can be one of the props, the pillars to help him endure and prevail.”