A battle over bilingual education raged Oct. 15 at the Graduate School of Education’s (GSE) Askwith Education Forum. California businessman Ron Unz, a champion of abolishing bilingual education, squared off against the GSE’s Catherine Snow, Henry Lee Shattuck Professor of Education and an expert on language and literacy development, in a heated discussion that pitted test scores against research data, and rhetoric against reality.

An estimated 375 students, faculty, and community members packed Askwith Lecture Hall, filling every stair and piece of floor and spilling into the hallways. Harvard University Police Department officers hired to manage the crowd turned away a significant number of would-be attendees. Although event organizers worked to balance the audience with supporters of both sides of the argument, the crowd was overwhelmingly pro-bilingual education; many audience members wore yellow armbands with “No Unz” penned on them.

Ron Unz, a Harvard College graduate and theoretical physicist by training, is the founder of a software company based in Palo Alto, Calif. As chairman of English for the Children, he led the lobby for California Proposition 227, which dismantled bilingual education programs in that state when it passed in 1998. Unz campaigned successfully against bilingual education in Arizona, and he is now making the struggle national, with Massachusetts one of his key targets.

Catherine Snow’s research focuses on how oral language skills are acquired and how they relate to literacy outcomes. Snow recently chaired a National Academy of Sciences committee that prepared the report “Preventing Reading Difficulties in Young Children.” Snow has also written about bilingualism and its relation to language policy issues such as bilingual education in the United States and in developing nations.

Perhaps buoyed by the day’s news that bilingual education opponents had collected enough signatures to put a referendum on the 2002 ballot in Massachusetts, Unz seemed unfazed by his detractors and delivered his message points with an easy smile. He proposes abolishing traditional bilingual education programs, in which students study in their native language until their English competency is sufficient to “reclassify” them, and replacing them with one-year English immersion classes.

Unz, whose previous foray into politics was an unsuccessful but notable run for governor against California incumbent Pete Wilson in 1994, described his campaign for Proposition 227 as bipartisan: “It was opposed by nearly all the Democrats and all the Republicans,” he said. After it was implemented, however, the measure won praise from many of its naysayers, including parents, the media, and educators.

“The proof of the pudding of any public policy measure is in the eating,” said Unz, who pointed repeatedly to impressive test scores to illustrate the success of California’s English immersion program. Since English immersion replaced bilingual education in California, the average test scores of immigrant students rose by 40 percent. Some schools, particularly ones that wholeheartedly embraced English immersion, doubled their test scores in two years. “This is the sort of thing that should be done in Massachusetts as well,” he said.

Snow countered with arguments supported by educational research. Learning English well enough to read and reason takes longer than one year, she said, and English immersion programs do not give immigrant students sufficient vocabulary to read and thus to succeed throughout school. “Learning how to read is the big challenge in school, it’s not speaking English,” she said.

The test scores that Unz hailed, said Snow, measure outcomes that are not of long-term relevance for English language learners. “I want to know whether children can understand stories and predict what might happen next … if they can explain their own reasoning when they do a math problem … if they’re going to get into algebra and trigonometry in high school, whether they’re going to get admitted to college,” she said. She also noted that California has recently implemented many changes that raised all test scores in the state, and that the score gap between native English speakers and nonnative speakers is not decreasing.

Admitting that “Ron Unz has done something that constitutes good citizenship,” Snow cautioned against setting educational policy by referendum and creating one-size-fits-all solutions. “Education is very complex, and silver bullets do not solve challenging problems,” she said.

Questions from Randolph and from the increasingly agitated audience continued to turn up the heat. Boston University chancellor John Silber was the lone audience voice in support of Unz and English immersion programs. Other audience members drew on their personal experiences as students, parents, and educators to question Unz’s position and promote bilingual education.

Claire Kirner, a bilingual education teacher from the Boston Public Schools, said afterward that Unz’s theories ran counter to the practice she saw with her students, whom she said do well in school when they learn content in their native languages. “He equates learning English with being educated. But we know plenty of people who know English who are not educated,” she said.

After the event, the panelists continued to field questions from a throng who rushed the podium. “I’m surprised at how emotional this is as an issue,” said GSE co-director of development and external relations Dottie Engler. “If they all learned a few things about the other side, I’d consider it a success,” she said. 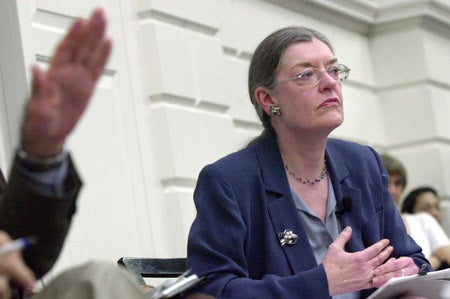