Elegant collection created over the years by finest smiths

Company’s coming, and Harvard is bringing out the good silver.

The Installation of President Lawrence H. Summers on Friday, Oct. 12, is one of the rare occasions when the eight pieces of the University’s ceremonial silver will see the (well-guarded) light of day.

The 17th and 18th century pieces, some of which were, until recently, on display at the Fogg Museum, make public appearances only during presidential inaugurations or other occasions of great ceremony, such as Prince Charles’ visit for Harvard’s 350th anniversary in 1986. Although several of the items may have seen useful service in their past lives, the silver pieces are now purely ceremonial. “They are not to be used but to be regarded,” says University Marshal Richard Hunt.

The value of the ceremonial silver is more than sentimental, says Sandra Grindlay, curator of the Harvard Portrait Collection at the Fogg Museum, who oversees the silver collection as well. “As works of art they’re extremely important,” says Grindlay, adding that they were crafted by some of the finest silversmiths of the time. “They’re wonderful to examine. They really reward careful looking,” she says.

The oldest and most significant of these pieces is The Great Salt, a saltcellar that dates to at least 1637. The piece, elegant in its simplicity, was brought to America in 1638 by the Rev. Jose Glover, who died on the trip from England. His widow, Elizabeth, married Henry Dunster, Harvard’s first president. Elizabeth’s brother, a tutor, donated The Great Salt to Harvard upon his death in 1644.

Salt in the 17th century was expensive – valuable for curing and preparing meats, and a saltcellar like The Great Salt would sit at the head of the table, signifying the authority of the head of household. As the centuries eroded this tradition and The Great Salt fell into only occasional ceremonial use, it was often displayed upside-down, its scrolled volutes presumed to be legs. As recently as the 1953 inauguration of President Nathan Pusey, The Great Salt was upended, inspiring Harvard historian Samuel Eliot Morison to note afterwards “please … place The Great Salt right side up!” Grindlay says that more recent scholarship indicates that a plate of fruit would have been placed atop the scrolls after the meal.

Several of the silver items came into Harvard’s collection as additional tuition payment granting well-connected students elevated status or exempting them from chores. The Browne Cup, a ceremonial two-handed cup dated to circa 1731, was commissioned by Harvard following a bequest by Col. Samuel Brown of Salem, a wealthy merchant. Brown donated 60 pounds for a silver piece to be engraved with his family’s coat of arms. According to Corporation records, Brown’s previous donations had freed his son Samuel from responsibility for errands and chores.

Similarly, the Vassal Tankards (c. 1729) brought the status and privileges of “Fellow-Commoners” to brothers John and William Vassal. In exchange for a gift of silver and higher tuition, Fellow-Commoners were greeted as “Mister” and sat at the tutor’s table. 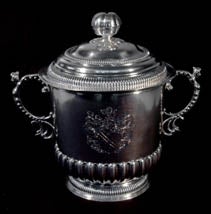 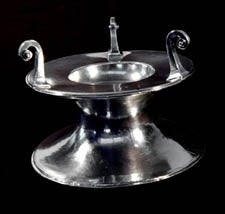 The Stoughton Cup was given to Harvard in 1701 by acting Gov. William Stoughton, Harvard’s most generous 17th century patron, who also funded the original Stoughton Hall. The Great Salt, Harvard’s oldest piece of silver, was mistakenly displayed upside-down as recently as President Pusey’s inauguration. (Staff photos by Stephanie Mitchell)

In the engraving on the identical tankards, Grindlay points out the rebus spelling the name “Vassal” in pictures: a picture of a vase is beneath a sun, or sol, spelling “vase-sol” or Vassal.

John Coney, one of Boston’s finest silversmiths, made both the Stoughton Cup and the Holyoke Caudle Cup. Although the scrolled handles of both items are similar, says Grindlay, they are of different sizes and could not have been cast from the same mold.

Acting Gov. William Stoughton, the benefactor who funded the construction of the original Stoughton Hall at Harvard, gave the Stoughton Cup for Harvard’s Commencement in 1701. However Stoughton, who was also the presiding judge at the Salem Witch Trials, was too ill to present it in person; he died a week after commencement.

The Holyoke Caudle Cup, dated circa 1700, was once used for caudle, a mixture of wine or ale and spices that was served at occasions like weddings, baptisms, and funerals. Originally belonging to Harvard President Edward Holyoke, it came into the collection 1903 as a gift of Holyoke’s great-great-granddaughter Charlotte Hedge. In addition to the finely detailed scrolled handles similar to those of the Stoughton Cup, the Holyoke Caudle Cup is ringed with embossed flowers and leaves, from which the faces of young children peek out.

Professor Levi Hedge, husband of President Holyoke’s daughter Elizabeth, is associated with the Hedge Tankard, the silver piece about which the least is known. Hedge found the tankard, made around 1700 by Boston silversmith Edward Winslow, when he became a tutor in 1795. In a letter he wrote to the Treasurer of the College in 1828, Hedge described it as “damaged by long use … bruised in sundry places. I have had it repaired by a silversmith, so that it is in a better state now than when it came into my hands.” Two dolphins grace the thumbpiece of the tankard.

The Dunster Tankard also has an element of mystery surrounding its ownership. Although rumored to have belonged to President Henry Dunster, a Queen Anne shilling at the base of its handle is dated 1707-08, after Dunster’s death. Indeed the silversmith, Ephraim Cobb, was not born until 1708; the tankard is dated circa 1760. It’s believed that the initials “H.D.” on the handle were added later to reinforce the misconception that the tankard belonged to President Dunster. Grindlay notes that it may have belonged to one of at least seven people named Henry Dunster between the time of the President and 1853, when the piece was donated.

Traditions of both dining and donating have changed, and silver has not been favored by either since the late 18th century. Yet Harvard’s rich history and gloried traditions live on in this ceremonial silver, linking Harvard’s past to its future.