The generous voice of a humanist

Master helps others harness ‘chi’ for health and healing 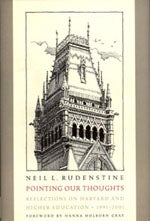 Barry Moser’s delicate pen-and-ink rendition of the restored Memorial Hall tower on the dust jacket of Neil L. Rudenstine’s new book “Pointing Our Thoughts: Reflections on Harvard and Higher Education, 1991-2001” stands as an appropriate symbol of its author’s achievement as Harvard’s 26th president.

Most obviously, it was during Rudenstine’s decade as president that the tower, destroyed by fire in 1956, was finally rebuilt. But as the loftiest and grandest of the many bricks-and-mortar projects to arise during a period of notable prosperity and expansion, the tower also stands for something beyond itself – a rededication of the University to its most exalted ideals. Those ideals find explicit form in the 375 pages of speeches and other writings that make up the book’s text.

What is immediately discernible in these pages is that Rudenstine is a prose stylist of great wit and charm who can draw the reader into even the most abstract discussions through the use of striking details that often embody a quirky, appealing humanity.

For example, in his 1995 Commencement Day address, he evokes Sir Alexander Fleming, the discoverer of penicillin, who spoke at the 1945 Harvard Commencement. What is most memorable in Rudenstine’s brief narrative is the fact that Fleming spent five years as a shipping clerk before an inheritance gave him the money to attend medical school.

From this fortuitous event, Rudenstine moves gracefully to the pure happenstance of Fleming’s discovery of mold spores in a bacteria culture and from thence to the general rule the bacteriologist drew from that fortunate accident: “Never neglect an extraordinary appearance or happening. It may be a false alarm and lead to nothing. But it may, on the other hand, be the clue provided by fate to lead you to some important advance.”

And from here, Rudenstine moves into his main theme, which is the importance of basic research and the fact that we can never tell when some seemingly obscure line of inquiry will lead to a breakthrough that will change the world.

As a literary scholar, Rudenstine is fond of quoting poetry and often finds unexpected parallels between his theme and a line or image from a poem. The poet he draws from most frequently is Robert Frost, but in a 1997 speech at the dedication of the Barker Center he quotes a lesser-known sonnet by John Keats in which the poet speaks of his walk home after an evening of literary discussion at the house of his friend, the poet Leigh Hunt.

The night is cold and gusty, but Keats insists that the threatening weather has no effect on him:

For I am brimfull of the friendliness
That in a little cottage I have found;

Rudenstine then goes on to compare Leigh Hunt’s cottage to the Barker Center, where, on a much larger scale, the humanities will also find a home and where stimulating discussions and revivifying collegiality can likewise flourish.

Rudenstine is often warmest and most entertaining when addressing undergraduates. In his 1997 Baccalaureate Address he takes the self-effacing and somewhat risky approach of elaborating on his own failure to find something original to say on such a well-worn occasion, but manages to bring it off with an effusion of wit and exuberance.

After reading a newspaper article reporting that graduation speeches that reveal the speaker’s personal tragedies are all the rage, Rudenstine speaks of his failed attempt to strike the tragic note in his own oration:

“I have lain wide awake for the last three nights, searching my psyche for some trace of the tragic, watching the sepulchral light of the moon casting lugubrious shadows as it moved slowly over the huddled objects in my room: the once vibrant electric treadmill, now rusted and fallen into disuse; the large bottle, half empty, of diet cola, reminder of the previous evening’s riotous revelry, full of sound and fury, without the consolation of even a single calorie.”

One might expect the president’s letter to the freshman class to be a formal and forgettable piece of boilerplate, but in his 2000 letter welcoming the incoming class to Harvard, Rudenstine reaches out with warmth and interest, encouraging the students to both sample unfamiliar subjects and explore one area with passion and depth.

He even recommends a list of favorite books, a gesture at once intimate and pedagogical: “The Crooked Timber of Humanity” by Isaiah Berlin, “The Education of Henry Adams” (much quoted and referred to in Rudenstine’s speeches), “The Double Helix” by James Watson, “Naturalist” by E.O. Wilson, “The Souls of Black Folk” by W.E.B. Du Bois, and the diary of Alice James (sister of novelist Henry and philosopher William).

Rudenstine’s speeches also serve as a guide to some of the most important issues confronting Harvard and higher education in general during the past decade. For example, in a speech to the Massachusetts Historical Society in 1996, he tackles the subject of diversity, an ideal much under attack by opponents of affirmative action.

Rudenstine addresses his subject from a historical perspective and shows that as early as the 1850s Harvard was pursuing the ideal of diversity (in a geographical if not yet a racial or ethnic sense) as a way of expanding the undergraduate experience and promoting regional understanding. By tracing the policy back through time, he demonstrates that the quest for diversity in higher education is by no means identical with affirmative action but is rather a strategy for enhancing the value of education itself.

In the speech that gives the book its title, “Pointing Our Thoughts” (from a Frost poem, “The Star-Splitter”), Rudenstine speaks of the relationship between the University’s scholarly and financial goals. Given in May 1994, it was the kick-off speech to the University Campaign, which raised an unprecedented $2.1 billion. But as the speech makes clear, Harvard’s scholarly and educational aspirations have always been the engine that has driven its fundraising efforts. Once again, Rudenstine’s historical approach makes us see the subject in a new light.

From Harvard’s early acquisition of a printing press (for 20 years the only one in the colonies) to its decision to pioneer the teaching of Chinese, to its creation of graduate and professional schools and a system of undergraduate houses modeled on the residential colleges of Oxford and Cambridge, the University has consistently striven to embody the highest scholarly and educational standards of its time.

Its intellectual daring has challenged its friends and supporters to make its dreams possible. And, reciprocally, unexpected gifts from visionary donors have often challenged Harvard to aspire to new heights.

Although the speech does not specifically mention the academic planning process – Rudenstine’s two-and-a-half-year effort to define the University’s needs and goals – we are reminded that in the case of Harvard’s most recent and most successful fundraising drive, it was the articulation of these goals that preceded and propelled the campaign, rather than a simple call to refill Harvard’s coffers.

In other speeches, Rudenstine discusses the value of the humanities, the potential of the Internet and other new technologies to enhance learning, developments in the professions and public service, and the developing relationship between Harvard and the world.

Throughout all these discussions the reader can hear Rudenstine’s distinctive voice, a voice of reason, optimism, humor, and humility that has set a civilized and inclusive tone for Harvard over the past 10 years.

As Hanna Holborn Gray, President Emeritus of the University of Chicago and a member of the Harvard Corporation, describes it in her introduction, “It is the voice of the humanist whose deep engagement with texts and ideas and language is always respectful of nuance and uncertainty, sensitive to the living fabric of history and tradition, generous to other ways of disciplinary study and attentive to the connections among them. It is the voice, too, of the academic citizen for whom the individual freedom of the scholar and student is paramount and for whom, at the same time, the ideal of an academic community has overriding moral power.”