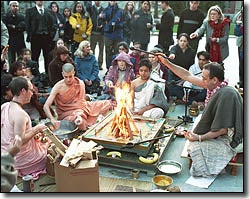 His Grace Srila Turiya Das Acarya Mahasaya, a Hindu priest of the Gaudiya Vaishnava tradition, presides over a Vedic fire ceremony held on the steps of Memorial Church. The event was co-sponsored by the Harvard Extension School and Dharma, a Hindu student group at Harvard.

The fires of knowledge burned brightly on the steps of the Memorial Church during a traditional Hindu ceremony last Thursday evening.

About 50 people gathered for the ceremony, including professors Diana Eck and Edwin Bryant. Co-sponsored by Dharma, a Hindu student group in Harvard College, the ceremonial fire was held to promote awareness of the rich cultural heritage of Hinduism, said Christian Labbee, president of the Harvard Extension School Chaitanya Vaishnava Society.

The Hindu fire ceremony is a sacred ritual performed by Hindus at all major junctures of life including birth and coming of age ceremonies, weddings, and funerals, as well as on all major religious holidays. Common to all branches of Hinduism, the fire ceremony is an observance central to the lives of millions of Hindus throughout the world.

“We feel that the performance of this ceremony on campus is in keeping with our goal of contributing to greater awareness and understanding of Hinduism within the Harvard community,” Labbee said.