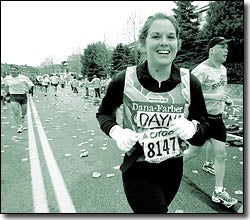 The Graduate School of Education’s Dayna Muller, whose vital signs were monitored while she ran the Boston Marathon last Monday, straddles the Wellesley-Newton town line prior to ascending Heartbreak Hill. Muller’s instrumented run is part of a new program to impress on the public how much science there is in sports. Her time was an impressive 4:36 and she raised over $2,000 for the Jimmy Fund, an effort by Boston’s Dana-Farber Cancer Institute to help patients, particularly children. Photo by Justin Ide 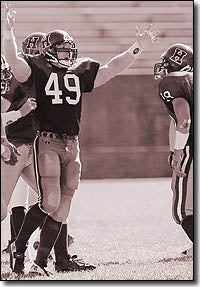 Senior linebacker Isaiah Kacyvenski celebrates after picking off a Columbia pass in 1999. Last week, Kacyvenski was drafted in the fourth round by the Seattle Seahawks. Photo by Jon Chase 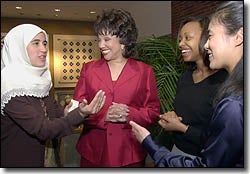