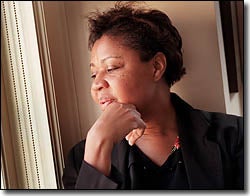 I was considered a very adorable child, and my mother would carry me around in her arms,” Jamaica Kincaid recently told her fiction-writing class at Harvard.

This combination of the beguiling and the surprising seems pure Kincaid, characteristic of herself and her writing.

A visiting professor in the English and Afro-American Studies departments this spring, Kincaid is teaching her students about freedom and transgression.

“I say there are rules and you must break them,” she tells her writing students, midway through an editing session.

“Challenge me on this,” she tells the student whose work she is following with a long orange pencil. “Dont let me violate your writing.”

Kincaid was born in Antigua, under the name Elaine Potter Richardson. She moved to New York as an au pair when she was 17; when she was 24, she changed her name to Jamaica Kincaid. She has said that she chose Jamaica because it connoted the Caribbean, and Kincaid, because it sounded good with Jamaica.

“Writing is a political act, a moral act, even,” she recently told students in her course, Reading Thomas Jefferson and the African in America. Her work frequently denounces imperialism, the degrading consequences of which she witnessed in Antigua. She also portrays fraught mother-daughter relationships, in ways that some critics interpret as not only autobiographical, but as a metaphor for the relationship between the colonizer and the colonized.

Kincaid herself refers to her “obsession with the destruction of a paradise.” At the same time, she cites the “dead white men” of her colonial education as her most profound literary influences.

Growing up, she says, “I read Shakespeare, Milton, the Bible. The Bible I read on my own, obsessively. I used to read a dictionary when I was a child, because I had nothing else to read.”

“I came to know myself through these people who couldnt be more different from me. I would read Jane Eyre, and I imagined myself as Charlotte Brontë. That she didnt look at all like me and lived at the other end of the world a hundred years ago didnt stop me, I just thought I would be Charlotte Brontë! Maybe George Bushs daughters want to be Charlie Parker  you dont know how the hell things are going to work,” she says wryly.

Kincaid refined her writing and her beliefs further in the elite environment of the New Yorker, then run by legendary editor (and future father-in-law) William Shawn.

“It shaped my life, it gave me a kind of courage,” Kincaid says of her time at the magazine. Shawn encouraged writers to pursue their own ideas. “It made me think that I must always speak my own mind. I must always be truthful as far as I could see.”

“When the New Yorker fell apart, that was the first thing taken away from us,” she says, alluding to editor Tina Browns reign from 1992 to 1998.

“You have an idea?” Kincaid mimes scornfully. “And who will be paying you for your idea? No, here is our idea, and we pay you for doing our idea. I mean, it was brutal.”

“Ive come to think that my own ideas are what matter to me,” she says. “The theme of my adult education is some sort of a notion of freedom  the desire to own your labor and make something of yourself through your work, through your own hands. Im constantly absorbed by how to make yourself free.”

“I love working. I think working is the most spiritual thing in the world,” she says. “No one can change your idea of yourself if youve worked for what you have. I really do think work does set you free.”

A collection of Kincaids “Talk of the Town” pieces, written for the New Yorker between 1974 and 1983, will be published this fall. Kincaid also is writing a new novel. Her most recent work, My Garden (Book), intertwines garden arcana, history, philosophy, and personal narrative.

“The garden in Kincaids mind never ceases to exist,” writes Verlyn Klinkenborg in the New York Times Book Review. Indeed, her thoughts run like unruly vines, from one subject to another. She has been inspired, often by her own beloved garden in Bennington, Vt., to pursue subjects as various as botanical Latin or Roman law. She once moved from contemplation of the bougainvillea, a brilliant flower, to researching the history of Louis Antoine de Bougainville, the first Frenchman to cross the Pacific, to studying the history of navigation.

“I am in a state of constant discomfort and I like this state so much I would like to share it,” she says in My Garden (Book),

Her manner is a hybrid, both restive and intense. She can appear almost childishly delighted at one moment, and Lady Bountiful in the next, warmly affirming those around her. She also has moments of what she calls “monumentally rude and truly insulting behavior  a temporary lapse in sanity.” In all her moods, there is a fervency, an ability to enter fully into each moment.

Kincaid doesnt write every day  “garden season,” she says meaningfullyand she describes her creative process as “catch as catch can.”

“I feel like writing all the time. But I have to have a clear idea, and I have to have certain words. Sometimes I pause in the middle of a sentence because the words arent quite right yet in my mind. So Ill dangle for a while. Or sometimes, I think Im writing and I sit in front of the typewriter for most of the day, and fifteen minutes before I have to pick up the children, I write three pages.”

Kincaid first came to Harvard in 1992, at the invitation of Henry Louis Gates Jr., director of the W.E.B. DuBois Institute for Afro-American Research and chair of the Afro-American Studies department. Gates has, on occasion, referred to Harvard as “heaven.”

“I wrote for the New Yorker for a long time, which gave me this incredible sense of privilege and belonging, and this sense of pride that you were associated with something decent, wonderful, and intelligent,” Kincaid says. “And just at the moment that it became clear to me that that was no longer true, I came here. So I suppose teaching in this place, with these people, really became especially important to me.

“I came to see that a lot of things I took for granted in the New Yorker no longer were at places like the New Yorker, but they still exist in the academy. The academys still filled with decent people who believe in the thing for its sake.”