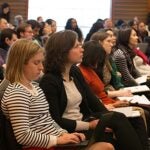 Prize honors world-renowned scientists and scholars who have made outstanding achievements in biochemistry and biophysics, cognitive science, environmental sciences, history, and medicine

The Royal Netherlands Academy of Arts and Sciences (KNAW) has awarded the 2018 Dr. H.P. Heineken Prize for Biochemistry and Biophysics to Xiaowei Zhuang, the David B. Arnold Jr. Professor of Science, professor of chemistry & chemical biology and of physics, and a Howard Hughes Medical Institute Investigator.

The Heineken Prize recognizes Zhuang’s far-reaching impact on scientific research, health, and medicine. She is one of the pioneers of super-resolution microscopy. She developed single-molecule and super-resolution imaging methods, which she then used to make fundamental biological discoveries. Her inventions have transformed research capabilities for numerous fields, from microscopy and chemistry to biology and medicine.

Thanks to the pioneering work of Zhuang and her team, it is now possible to visualise and track the behaviour of virions, RNA molecules, and cytoskeleton filaments in living cells.
—Royal Netherlands Academy Of Arts And Sciences

To understand how cells function — and malfunction in diseases — we need to watch how molecules in cells work and interact. Zhuang and her lab invented one of the first and most widely used super-resolution imaging methods known as STORM (Stochastic Optical Reconstruction Microscopy), which circumvents the diffraction limit of light microscopy.

This powerful method enables researchers to watch, with nanometer-scale resolution, the molecular interactions, dynamics, and functions in cells.

More recently, Zhuang and her team invented a single-cell transcriptome imaging method called MERFISH (multiplexed error-robust fluorescence in situ hybridization), which allows the expression levels and spatial distributions of RNAs from thousands of genes to be determined in individual cells. This groundbreaking invention enables researchers to map the organization of the transcriptome and genome inside cells and to identify and map distinct cell types in complex tissues.

Zhuang not only invented powerful imaging methods, she applied them to investigate a variety of biological problems, including molecular structures in cells, organization of chromatin in the nucleus, regulation of gene expression, and organization and development of distinct cell types in tissues. With STORM, Zhuang and her lab have discovered novel cellular structures, including the periodic membrane skeleton in neurons.