Vision & Justice: A creative convening on art, race, and equity 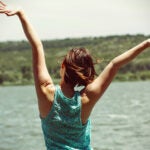 Harvard University’s Radcliffe Institute for Advanced Study will host Vision & Justice, a landmark two-day creative convening that will explore the role of the arts in the construction of citizenship, race, and justice.

The Vision & Justice program, which will take place on April 25-26, features luminaries in the fields of music, photography, film, and social justice while emphasizing short, stimulating presentations with the goal of catalyzing ideas for future work in art and justice.

The event grows out of Sarah Lewis’ research and teaching in her course, “Vision & Justice: The Art of Citizenship,” which inspired the award-winning Vision & Justice issue of the photography journal Aperture, guest edited by Lewis in 2016. It is co-sponsored by the Hutchins Center for African & African American Research, the Harvard Art Museums, and the American Repertory Theater.

The convening takes its conceptual inspiration from Frederick Douglass’ landmark Civil War speech “Pictures and Progress” about the transformative power of pictures to create a new vision for the nation. The Vision & Justice convening will focus on both the historic roots and contemporary realities of visual literacy for race and justice in American civic life.

“American citizenship has long been a project of vision and justice,” said Lewis, who is assistant professor of history of art and architecture and African and African American Studies at Harvard. “I organized this convening based on my research and teaching, and I wanted to frame it around several guiding questions, and invite speakers who rarely converge to answer them anew.

“How is the foundational right of representation in a democracy — the right to be recognized justly — tied to the work of images in the public realm? What is the role of the arts for justice? How have narratives created by culture — the arts, performances, and images — both limited and liberated our definition of national belonging in this digital, democratic age?”

“The Hutchins Center is thrilled to cosponsor Vision and Justice,” said Henry Louis Gates, Alphonse Fletcher University professor and director of the Hutchins Center for African and African American Research at Harvard. “Sarah Lewis’ work literally has transformed the way we see American history, especially with regard to citizenship. Who indeed is American? The artists, scholars, and thinkers she has convened will help us to address this fundamental question from multiple illuminating perspectives.”

The star-studded program includes: a performance by Carrie Mae Weems; a conversation about “Central Park Five,” the forthcoming miniseries by Ava DuVernay and Bradford Young with Professor Henry Louis Gates, Jr.; and a performance by Wynton Marsalis. Dr. Mona Hanna-Attisha, who discovered the Flint, Mich. water crisis, will also exchange ideas with Chelsea Clinton, and a video by LaToya Ruby Frazier, who used her camera to highlight injustice, will be shown.

This event will coincide with the release of a second issue of Vision & Justice, this one a free “civic curriculum,” edited by Lewis. It will feature reprints of seminal articles from James Baldwin, Gates, a conversation between Lewis and Stevenson, an original poem from Youth Poet Laureate of the United States Amanda Gorman, and a conversation between Ava DuVernay and Bradford Young. It also includes essays by current and former Harvard students from Lewis’ Vision & Justice course.

“Gordon Parks: Selections from the Dean Collection” opens at the Hutchins Center’s Ethelbert Cooper Gallery of African & African American Art in tandem with the convening, with a public reception on April 26, and runs through July 19.

Registration opens on April 10 for the Harvard community and April 11 for the public.

The full schedule can be found on the event’s website.