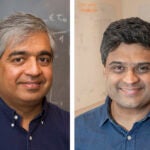 As part of Commencement festivities this week, the Harvard Graduate School of Education hosted two members of the change-making 2018 Congressional class, Representatives Jahana Hayes (D-CT) and Ayanna Pressley (D-MA). Both dynamic lawmakers have a strong interest and track record of leadership in education — Pressley from a community-building, whole-child-sustaining point of view, and Hayes (a former National Teacher of the Year) from a classroom-informed, opportunity-and-equity point of view.

We spoke with them in the few moments they had before taking the stage to deliver keynote addresses at Harvard’s Black Graduation ceremony, held in Radcliffe Yard on May 28. The event was organized by the Harvard Black Graduate Student Alliance.