The A.R.T. announces its next executive director 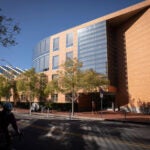 Dinkins is a nationally recognized leader in American theater and a pioneering voice advocating for transformational culture change in theater leadership, management, and the industry at large. He is currently the general manager of Yale Repertory Theater and assistant dean and acting chair of theater management at David Geffen School of Drama at Yale. Dinkins serves on the board of directors for the League of Resident Theatres (LORT) and the board of trustees of Theatre Communications Group (TCG), Yale Cabaret, and the Princeton University Triangle Club. He is also the co-chair of the LORT Equity, Diversity, and Inclusion (EDI) Committee where he has developed initiatives to center collective action and raise the racial and gender representation in executive leadership in LORT theaters.

Dinkins will co-lead the A.R.T. in partnership with Diane Paulus, the institution’s Terrie and Bradley Bloom Artistic Director, and jointly report to the A.R.T. board of trustees and the provost of Harvard University. He will join the Greater Boston community when he begins his appointment on June 1, 2022.

“I am delighted that Kelvin is joining the American Repertory Theater as its new Executive Director,” said Garber. “Since its founding, A.R.T. has led the way in groundbreaking theatrical performance, working to inspire discourse, collaboration, and creative exchange in the Harvard and Greater Boston communities. Kelvin’s impressive record of strategic leadership, his dedication to the ideals of diversity and inclusion, and his commitment to strengthening A.R.T.’ ties with the University community will be great assets as A.R.T. continues to expand the boundaries of theater.”

“In searching for A.R.T.’s next executive director, we were seeking a dynamic partner for Diane to collaboratively shape the institution’s strategic vision, support its artistic ambition, and lead us into the future,” said Ory, board chair and co-chair of the executive director search committee. “We have found this partner in Kelvin, who will not only be critically important to A.R.T., but also to the American theater as an industry leader for years to come. We are so fortunate to gain his perspective, managerial experience, and leadership at this pivotal moment for our organization.”

“I am thrilled to be partnering with Kelvin on the next chapter of the A.R.T.,” said Paulus. “Kelvin’s leadership in the American theater is rooted in a deep sense of values and humanity, vast pedagogical and managerial experience, and a passionate love of theater. I am very excited to work welcome Kelvin to our A.R.T. family and our community as our new executive director.”

Said Dinkins, “I am proud and eager to be joining Diane and the A.R.T.’s dynamic staff as the theater moves into its next chapter of boundless artistry and community building. I join them and the boards in committing to a future where our leadership is joyfully accountable and transformational. Collectively, we must now center humanity and restorative practice to lead our re-emerging producing organizations. At A.R.T. I see great capacity to expand our approach to equitable and sustainable practices, broadening access and building intentional partnerships that will help the mission to thrive. I am excited to become part of this community and to join with so many leaders and arts institutions in the area I have long admired.”

In addition to his leadership and management at Yale, Dinkins serves as an Assistant Professor Adjunct in Theater Management, mentoring students and most recently teaching courses in management, crisis and recovery, and anti-racist theater practice.

“As an educator and practitioner, I am energized by A.R.T.’s role as a creative convener at Harvard, and its unique position to harness the abundance that exists between training, education, and intergenerational leadership. I am excited for A.R.T.’s aspiration to boldly take the University and all audiences on a journey into what the next 50 years of artistic creativity looks like, not just on our stages but in classrooms, community cultural centers, our workplace, and the world,” said Dinkins.

In addition to his roles at Yale University, Dinkins is the founder of Dinkins Consulting, advising institutional leaders on change management and development of equity, diversity, inclusion, and anti-racism initiatives for teams and individuals. He has previously held management positions with Two River Theater in Red Bank, New Jersey, The Civilians in New York City, and Intiman Theatre in Seattle.