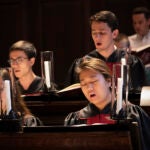 Schooner finishes its research mission, offers onboard visits, and partners with Radcliffe Institute for science lecture

After more than two years at sea, the research schooner Tara docked in Boston for a weeklong visit.

During the Tara Pacific Expedition, which began in May 2016, the vessel has traveled more than 62,000 miles, studying 40 archipelagos and making 70 stops in 30 countries along the way — all in the interest of understanding the biodiversity of coral reefs and their evolution in this age of rapid climate change and increasing human activity.

Forty percent of the world’s coral reefs are located in the Pacific, the world’s largest ocean, and this Tara expedition is the first of its kind in terms of scale.

This weekend, scientists on board are eager to share their findings with the public: they are inviting visitors to the Tara on Saturday, Sept. 29, and Sunday, Sept. 30, for 30-minute presentations about the expedition.

On Tuesday, the Radcliffe Institute will host “Tara Oceans: Cells, Embryos, and the Origins of Complexity in Life,” to be presented by Eric Karsenti, the scientific director of the Tara Oceans expedition and codirector of the Tara Oceans Polar Circle expedition and a visiting group leader at the European Molecular Biological Laboratory. In addition to being the second in The Undiscovered Science Lecture Series, the lecture is the public conclusion of a Radcliffe-funded workshop organized by Chris Bowler, RI ’17, the CNRS Director of Research at the Institut de Biologie de l’Ecole Normale Supérieure, in Paris, and Colleen Cavanaugh, the Edward C. Jeffrey Professor of Biology at the Harvard Faculty of Arts and Sciences.

Bowler is a scientific coordinator of the Tara Oceans expedition, and Cavanaugh joined the Tara for its New York–Boston sail.

On October 4, after making Boston its last stop, the Tara will set sail for home, in Lorient, France.