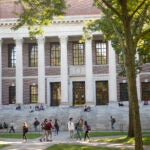 The morning after the shooting in Uvalde that left 19 students and two teachers dead, Peter Swing, Ed.M.’22, was wide awake, sitting at his computer in a hotel room. It was 2 a.m., and he couldn’t sleep. The tragic events that had just unfolded at the Texas elementary school had unearthed a lot of feelings. He thought about Sandy Hook, the 2012 school shooting where 26 students and teachers died — and the reason he and his family moved from the United States to Costa Rica. He thought about the friends he had lost over the years to gun violence, first growing up in a rough neighborhood in East L.A., and then later as a U.S. Marine.

“This really hit me,” he says. With his wife and children sleeping nearby, Swing logged on to the HGSE Commencement ’22 WhatsApp chat and started writing. He wondered how he and his classmates could honor those killed in Uvalde and how they could come together, as educators, to stop gun violence in schools. “I don’t usually take a front stance,” he says. “I’m one of those folks usually on the sidelines, but I really felt compelled to take action. I felt as educators that we had to do something.”

Classmate Tanya Wright, Ed.M.’22, was having similar feelings. She saw Swing’s post and started an off-shoot chat to brainstorm ideas. By 1 p.m. that Wednesday, a group had gathered on campus. Despite the hectic day they knew they were all facing — Convocation, a block party on Appian Way, other pre-Commencement activities — they started coming up with a plan to advocate for safer gun laws and better protection for students and educators in schools.

“We all knew that everyone who went to that meeting was invested in some way, shape, or form about the tragedy,” Swing says.

Patricia Vazquez, Ed.M.’22, suggested having students hold black cards with messages about gun violence in front of the children’s books that Ed School students traditionally hold at Commencement in Harvard Yard. Wright went out and got supplies while Katherine Montero, Ed.M.’22, and other students began making orange ribbons for the community to wear that week. The group worked with Commencement organizers to add in a 21-second moment of silence during the HGSE diploma ceremony — one second for every life lost in Uvalde. Catherine Pitcher, Ed.M.’21, and Haley Magwood, Ed.M.’22, started drafting letters on the group’s behalf to Massachusetts Congressional members, urging them to fulfill the demands of the Sandy Hook Promise and support legislation that flags violent material on social media. Another letter geared toward recent alumni includes templates so recipeints can write their own advocacy letters to lawmakers.