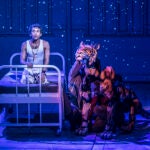 Haim Sompolinsky, visiting professor at the Center for Brain Science and Department of Molecular and Cellular Biology, has been named as one of four recipients of the 2022 Gruber Neuroscience Prize, an international award given for seminal contributions to the fields of computational and theoretical neuroscience. Sompolinsky, who is also the director of Harvard’s Swartz Program in Theoretical Neuroscience, shares the honor with Larry Abbott (Columbia University), Emery Neal Brown (Massachusetts Institute of Technology and Massachusetts General Hospital), and Terrence Sejnowski (Salk Institute for Biological Studies).

“These four remarkable scientists have applied their expertise in mathematical analysis, statistical physics, and machine learning to create theories, mathematical models, and tools that have greatly advanced how we understand the brain,” said Joshua Sanes, professor of molecular and cCellular biology and founding director of the Center for Brain Science at Harvard and member of the Selection Advisory Board to the Prize.

Sompolinsky’s pioneering research has centered on creating mathematical models to describe how information is processed in the brain’s neural circuits.

In particular, Sompolinsky has researched the attractor-network models that describe the collective behavior and informational processing of large, complex neural circuits in the brain. He has also described how the combination of neuronal excitation and inhibition lead to chaotic yet controllable patterns of activity, profoundly influencing our understanding of brain systems.

“You can think about the nervous system as a passive filtering of stimuli,” explained Sompolinsky, who is also professor emeritus at the Edmond and Lily Safra Center for Brain Sciences at the Hebrew University of Jerusalem. “But this is only a minor part of how the brain operates. In fact, the brain is an active player through its own intrinsic dynamics. The brain continually generates hypotheses about what is out there and what will happen next: Think about planning, decision making, think about creativity, think about solving problems.”

Sompolinsky utilized mathematics to look at the brain “from the perspective of the system,” he said. This allows examination of “how the collections of millions of nerve cells with their connections operate together to produce perception, cognition, action, consciousness.”

These theoretical models have already begun to be validated by experiments. In 1995, Sompolinsky developed a neural circuit model called a ring attractor, which exhibits a manifold of stable patterns of activity, smoothly moving along a circle.

“Recently, in the navigational system of the fly experimentalists have been able to actually  observe this ring attractor, to visualize a pattern of neuronal activity that moves smoothly around this ring, tracking the changing direction of the heading of the animal,” said Sompolinsky.

Looking ahead, “we would like to build on our success in understanding the collective behavior of the local neural circuits to develop an understanding of how entire systems in the brain negotiate dynamically among their different constituents and settle into a coherent perception of our world, generate abstract conceptions, decision-making and action planning,” he said.

The Gruber Prize, which includes a $500,000 award, will be presented to Sompolinsky in San Diego this fall.