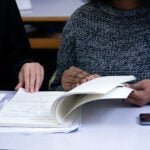 Seven Harvard researchers are among the 489 scientists who have been named fellows of the American Association for the Advancement of Science (AAAS), the world’s largest general scientific society.

The lifetime appointment honors individuals because of their scientifically or socially distinguished efforts to advance science or its applications. The fellows from Harvard are: Marcia Goldberg, David Liu, Eric Mazur, Matthew Meyerson, Christopher W. Stubbs, Jerrold Turner, and Lee Zou.

Their research ranges from studying infectious diseases to the DNA to ultrashort-pulse lasers.

Along with the other 2020 AAAS fellows, the scientists will be honored during a virtual forum in February. The fellows will be presented with an official certificate and a gold and blue rosette pin, representing science and engineering.

The AAAS was founded in 1848 and its tradition of naming AAAS Fellows began in 1874. It includes more than 250 affiliated societies and academies of science, serves 10 million individuals, and publishes the journal Science.

Election as an AAAS fellow is an honor bestowed upon association members by their peers. For more information on the nomination process, visit the AAAS website.

The fellows are recognized for the following:

Goldberg, professor in the Department of Immunology and Infectious Diseases at the Harvard T.H. Chan School of Public Health and professor of medicine at Harvard Medical School, was honored for her contributions to the field of microbial pathogenesis, particularly the molecular mechanisms of host-pathogen interactions.

Liu, the Thomas Dudley Cabot Professor of the Natural Sciences in the Faculty of Arts and Sciences, was honored for pioneering advances such as base editing and DNA-encoded libraries that creatively integrate chemistry, evolution, and molecular biology to impact medicine and the life sciences.

Mazur, the Balkanski Professor of Physics and Applied Physics in FAS, was honored for advancing the physics and applications of ultrashort-pulse lasers and nonlinear optical devices, and for sparking worldwide adoption of active learning techniques through Peer Instruction.

Meyerson, professor of pathology at HMS and researcher at Dana-Farber Cancer Institute, was honored for distinguished contributions and pioneering genomic discoveries in cancer biology.

Stubbs, the Samuel C. Moncher Professor of Physics and of Astronomy in FAS and dean of science, was honored for his pathbreaking work at the intersection of particle physics, gravitational physics, and cosmology, and for his contributions to arms control and international security issues.

Turner, a professor of pathology and medicine at HMS and Brigham and Women’s Hospital, was honored for distinguished contributions to cell biology, physiology, pathobiology, and diagnosis in gastrointestinal science, particularly for defining functions, regulatory mechanisms, and molecular therapies targeting mucosal barriers.

Zou, professor of pathology at HMS and associate scientific director of the Massachusetts General Hospital, for distinguished contributions to the fields of biochemistry and cancer, particularly for studies on the maintenance of genome stability.