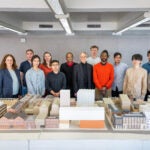 Samagya Banskota, former postdoctoral researcher in the David Liu Lab, has been recognized as one of the world’s top innovators under 35 by MIT Technology Review.

Banskota was celebrated for her work co-inventing a new drug-delivery system using engineered virus-like particles (eVLPs) that can make precise edits to the genome.

This year’s innovators were chosen from more than 600 nominees by the editors of MIT Technology Review and a panel of 31 expert judges. The honorees are awarded in one of five areas: climate change, AI and robots, materials science, computing, and biotech.

Banskota is among a cohort of scientists, researchers, and innovators whose work will “change what’s possible in every field of science and engineering,” according to MIT Technology Review.

“These are the people to watch if you want to see what happens at the leading edge of technology in the years ahead,” says Amy Nordrum, editorial director for special projects and operations.

Banskota received a Bachelor of Science degree from Penn State University in 2012 and earned her Ph.D. degree from Duke University in 2019. She then joined the laboratory of David Liu, the Thomas Dudley Cabot Professor of the Natural Sciences, in January 2020 as a postdoctoral researcher.

Banskota co-authored a paper, published in Cell in January, that details how the research team developed virus-like particles to deliver base editors, proteins that make programmable single-letter changes in DNA, and CRISPR-Cas9 nuclease, a protein that cuts DNA at targeted sites in the genome. Banskota identified factors that influence virus-like-particle delivery efficiency and demonstrated that engineering these particles can overcome multiple structural limits to their potency.

The team tested the new delivery system by editing genes associated with high cholesterol and vision in mice. The team’s eVLPs are the first virus-like particles to deliver therapeutic levels of base editors to a variety of cell types in adult animals.