The Fromm Players at Harvard present ‘Resistance and Hope’ 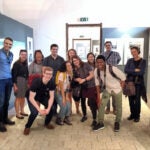 Walter Bigelow Rosen Professor Chaya Czernowin’s choices of composers and works for this year’s Fromm concert centers on individuality, integrity, and artistic focus. Some of this year’s Fromm program is, clearly, ostentatiously political. The Prince Myshkins — whose inclusion on this concert is, to say the least, an innovation — feed on the Orwellian absurdity of our power structures, skewering with pointed humor and intricate songwriting. The three other composers here epitomize the single-minded pursuit of an artistic vision and the creative life, in the face of misunderstanding, mistrust, and indifference, and regardless of external, traditional notions of success. But there’s also a subtle connection here — the folk/protest song underpinnings of the Myshkins resonate with the folk-music basis of Ben Johnston’s String Quartet No. 5. That piece, incidentally, is performed here by the Kepler Quartet, which was formed in 2002 for the purpose of performing and recording Johnston’s string quartets. Their immersion in this repertoire brings unmatched breadth and richness to their interpretations.

The Fromm Players at Harvard, a professional ensemble dedicated to the performance of contemporary music, play works organized around a strong theme that add something unique to new music in Boston.

“Resistance and Hope” takes place on Saturday, March 31 at 7 p.m. at the John Knowles Paine Concert Hall, 3 Oxford St., Cambridge, Mass. Free and open to the public. Free parking in Broadway Garage, corner of Felton St. and Broadway. Please visit https://music.fas.harvard.edu for more information, or contact by phone at 617-495-2791 or via email at musicdpt@fas.harvard.edu