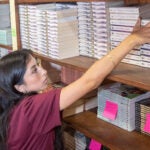 As the United States and China joust over high-risk disputes including Taiwan and Hong Kong, researchers at Harvard Kennedy School have stepped back to assess how the U.S.-China diplomatic rivalry has evolved during the 21st century as China has emerged as a dominant economic power.

Their conclusion: China has abandoned its longtime mantra of keeping a low profile and quietly getting along. Today’s Chinese diplomats draw from a new playbook, the researchers argue. “In a phrase: Game on. The era of ‘hide and bide’ is over,” they assert in a new report. “China is now determined to compete as aggressively in bilateral and multilateral diplomacy as it does in other arenas.”

The report says that while Washington has denigrated diplomacy and disinvested in it, “on most metrics of diplomacy, China’s position relative to the United States has risen dramatically over the past two decades.” In hosting summits, meeting with foreign leaders, building up embassies and consular staffs, “China has made great leaps forward.”

And for lead author Professor Graham Allison, the current U.S.-China showdown over Taiwan policy is an especially worrying and dangerous example of the trends documented throughout the study, revealing American strategic and tactical lapses.

The discussion paper, “The Great Diplomatic Rivalry: China vs. the U.S.,” is the fourth in a series of concise studies forming “The Great Rivalry: China vs. the U.S. in the 21st Century,” from the Kennedy School’s Belfer Center for Science and International Affairs.  Allison, the Douglas Dillon Professor of Government and former Kennedy School dean who has studied big power rivalries for more than five decades, is faculty director for the Avoiding Great Power War Project. His co-authors on the diplomacy paper are former research assistants Alyssa Resar and Karina Barbesino.

The first three papers covered equally key aspects of the U.S.-China rivalry—economic, technological, and military. The work flows from Allison’s most recent book, Destined for War: Can America and China Escape Thucydides’s Trap? The 2017 book prompted extensive debate on whether China and the United States can avoid the kind of war that resulted in the past when a rising power threatened to displace a ruling power.