‘Racism in America’ released as a free e-book 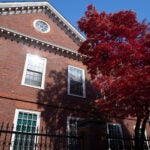 Racism in America has been the subject of serious scholarship for decades. In that time, Harvard University Press (HUP) has had the honor of publishing some of the most influential books on the subject. Culled from the HUP’s publications in history, law, sociology, medicine, economics, critical theory, philosophy, art, and literature, “Racism in America: A Reader” was released as a free e-book on Aug. 4.

The book will be available for download on the HUP website and also via digital book retailers on all ebook platforms. It is an invitation to understand anti-Black racism through the eyes of some of its most incisive observers.

Readers will find selections from classic works, as well as more recent voices from the past three decades, including:

Because the experiences of other non-white peoples are often intertwined with the story of Black Americans and figure into the broader history of racism in America, there are included as well as writers who focus on the struggles of Native Americans, Latinos, and Asians. “Racism in America” is for all readers, teachers, and students curious to discover for themselves this rewarding body of intellectual work that has fed our national conversation on race for years and will continue to do so.

“HUP has a long and rich tradition of publishing the most penetrating work on this stubborn and still unresolved national problem,” said HUP Director George Andreou. “By making a portion of that work available for free to all readers, we hope to nurture the reflection, recognition, and exchange without which there can be no solution.”