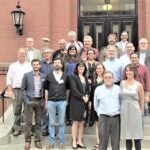 The SNAP program — the Supplemental Nutrition Assistance Program, formerly known as food stamps — is a federal program designed to reduce food insecurity and help families obtain nutritious foods. But a new study from Harvard T.H. Chan School of Public Health suggests that SNAP, which serves one in seven Americans, may also be subsidizing substantial purchases of unhealthy foods.

The study, published online Aug. 14, 2017 in the American Journal of Preventive Medicine, found that food purchases paid for with SNAP benefits consisted of higher spending on less healthy foods, including sugar-sweetened beverages, red meat, and convenience foods, and lower spending on healthier foods such as fruits and vegetables, compared with purchases paid for with other means.

“These data should launch a new era of programs that increase benefits to the most needy but with strategies to encourage participants to purchase healthier foods,” said Eric Rimm, senior author of the study and professor of Epidemiology and Nutrition at the Harvard Chan School. “Let’s try a new program that would give participants a choice of the current SNAP program or a revised package in which sugar-sweetened beverages are ineligible but benefits for fruits and vegetables are increased. Then we could test to see whether this strategy helps promote healthier purchasing patterns among SNAP participants.”

The study looked at two years’ and nearly 300 million shopping baskets’ worth of sales data from April 2012–April 2014 from 188 stores across five states — Maine, Massachusetts, Vermont, New Hampshire, and New York. The research team identified individual foods by their Universal Product Code or price look-up code, grouped the foods into categories based on their nutritional characteristics, and determined which transactions were paid for with SNAP dollars and which weren’t.

The Harvard Chan researchers found that food purchases made both with and without SNAP were far from consistent with the U.S. Dietary Guidelines for Americans, which provide recommendations for healthier eating. But SNAP purchases included higher percentages of less healthy foods than non-SNAP purchases.

“There are many possible explanations for the differences we observed, but it is important to document how SNAP dollars are spent to inform the current debate about how the program might be improved for participants,” said research fellow Rebecca Franckle, lead author of the study.

The greatest discrepancies in composition between SNAP and non-SNAP purchases were major protein foods (35 percent vs. 29 percent) and fruits and vegetables (14 percent vs. 21 percent).

Rimm and Franckle are part of a team at Harvard Chan School—the EVidEnce-based Research GRoup to EvaluatE Nutrition policy (EVERGREEN)—that is invested in improving population health through assessment of current U.S. nutrition policies and programs.