Policies to keep fracking from harming health may be inadequate 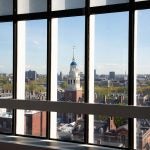 Policies aimed at protecting people from adverse health impacts related to unconventional natural gas development (UNGD), or fracking, may not work as intended, according to a new study led by Harvard T.H. Chan School of Public Health.

The study, conducted with colleagues from the research institute PSE Healthy Energy and Duke University, looked at the effectiveness of a regulation in Pennsylvania that requires UNGD wells to be at least 500 feet away from non-industrial buildings. The researchers found that, in spite of the regulation’s intent, there was no significant change in where wells were positioned after the regulation took effect in 2012. The findings suggest that companies involved in fracking are frequently being granted exemptions from the regulation, according to the study authors.

“Existing well pad exemptions and waivers seem to occur frequently enough that we didn’t see much change in how wells were sited in relation to nearby buildings,” said lead author Drew Michanowicz, senior scientist at PSE Healthy Energy and a visiting scientist at Harvard Chan School’s Center for Climate, Health, and the Global Environment (Harvard Chan C-CHANGE), in an April 28, 2021, press release from PSE Healthy Energy.

Jonathan Buonocore, research scientist at C-CHANGE and a study co-author, said, “With the myriad of health effects occurring in communities near hydraulic fracturing — increased hospitalizations, respiratory irritation and birth defects—it’s important to ensure that these setback regulations are actually effective at protecting public health.”