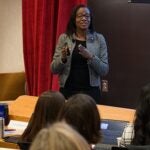 The $25,000 Goldsmith Prize for Investigative Reporting from the Shorenstein Center on Media, Politics and Public Policy at Harvard Kennedy School has been awarded to Nina Martin of ProPublica and Renee Montagne of NPR for their investigative reporting series Lost Mothers.

The United States has the highest rate of maternal deaths in the developed world; NPR and ProPublica found at least half could be prevented with better care. The series tracked maternal deaths, saved lives by raising public awareness of post-birth complications, and prompted legislation in New Jersey and Texas.

“The mothers of America deserve the best medical care before, during, and after childbirth. We not only owe them that dignity — it is a moral imperative,” said Shorenstein Center Director Nicco Mele. “The state of that care, uncovered by Nina Martin and Renee Montagne’s reporting, deserves close scrutiny. The Goldsmith judges had the challenge of choosing one winner from a number of compelling, important stories this year. ‘Lost Mothers’ is undoubtedly deserving of this special recognition. An under-reported story with a devastatingly human angle, their report shines a light on a problem all around us, but rarely told with such power and grace.”

Additionally, the Shorenstein Center awarded the Goldsmith Career Award for Excellence in Journalism to Martha Raddatz, ABC News chief global affairs correspondent and co-anchor of “This Week with George Stephanopoulos.”