Nobel Laureate Nadia Murad tells of her escape from ISIS 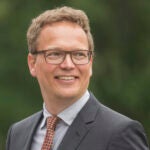 On Aug. 3, 2014, Islamic State militants launched an attack on the Yazidi people in Sinjar, northern Iraq, the homeland of approximately 500,000 Yazidis. ISIS killed and captured thousands of people in the small religious community because the militants consider them to be infidels and their religion to be devil worshipping. Many Yazidis fled to nearby Mount Sinjar, a sacred place in their community for more than a thousand years.

Nadia Murad was 21 years old in 2014 when her peaceful life on the family farm in Kocho was forever changed. ISIS militants killed her mother and six of her brothers. She was captured, along with many other women, and forced into sexual slavery for several months. Since her escape, she has been advocating for victims of sexual violence and working to rebuild communities in crisis. In 2018, she was selected as a co-recipient of the Nobel Peace Prize.

The Weatherhead Center for International Affairs, together with the Center for Middle Eastern Studies, invited Nadia Murad to Harvard University to deliver the Samuel L. and Elizabeth Jodidi Lecture on April 3 in the Memorial Church. Murad spoke to WCFIA faculty associate Jennifer Leaning, an expert in public health and rights-based responses to humanitarian crises, through the help of Yazidi translator Shahnaz Osso. Their conversation focused on Murad’s upbringing and trajectory of her life and work since the attack. The the full conversation, including video and transcript, can be found here.