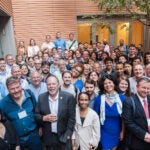 Common orthodontic problems such as crossbite, overbite, underbite, and crowding of the teeth can have a negative impact on a person’s physical appearance, dental function, and overall self esteem. To make a diagnosis and plan treatment, orthodontists currently take multiple x-ray images of the entire skull before, during and after orthodontic treatment. Part of the skull, the cranial base, is used as a stable reference for determining the position and orientation of the jaws and teeth when planning treatment changes. While the amount of radiation is small, x-rays of the whole skull taken multiple times during treatment can be a concern, especially for pediatric patients who are generally more susceptible to the harmful effects of ionizing radiation than adults.

A recent study published in the European Journal of Orthodontics, suggests that another approach using non-radiographic 3-D dental photogrammetry could offer accurate dental and facial measurements based on using the eyes and natural head orientation as references rather than the cranial base.

Mohamed Masoud, director of Orthodontics in the Department of Developmental Biology at the Harvard School of Dental Medicine, along with his research team studied 180 females and 200 males between the ages of 18 and 35 using 3-D facial and dental imaging to produce an adult sample with near ideal occlusion and a pleasing facial appearance. The goal was to provide reference values that can aid practitioners in determining the relative position and orientation of a patient’s dental and facial structures without exposing the cranium to radiation.