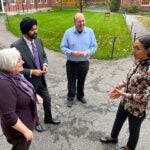 These findings were reported in a new peer-reviewed research article published in Health Affairs by scholars affiliated with the Shift Project, a joint research initiative between Harvard Kennedy School’s Malcolm Wiener Center for Social Policy and the University of California, San Francisco. The authors are Kristen Harknett, Professor of Social Behavioral Sciences at UCSF, and Daniel Schneider, Malcolm Wiener Professor of Social Policy at Harvard Kennedy School.

“State and local laws help raise the floor and they narrow the gap, but far too many service sector workers are not covered by these laws, and it will take federal action to ensure broad and equitable access to this essential benefit,” says Daniel Schneider. The Healthy Families Act, introduced in 2004 and reintroduced in 2021, would address inequalities in access to paid sick leave benefits, but this legislation has failed to progress. Schneider and Harknett argue that a federal guarantee to paid sick leave for all workers would reduce inequality, protect public health, and protect workers.