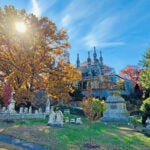 Donald Trump won the 2016 presidential election thanks in large part to overwhelming support from one particular group of folks: white evangelicals.

In fact, a whopping 81 percent of self-identified evangelicals voted for President Trump. That’s even more support than President George W. Bush received, and he’s actually an evangelical. And despite what seems to be weekly, if not daily controversy over the president’s public remarks and past behaviors, a poll from earlier this year found that 75 percent of white evangelicals still hold a positive opinion of Mr. Trump.

Timothy Keller, a prominent evangelical pastor in New York, wrote in The New Yorker that “people who once called themselves the Moral Majority are now seemingly willing to vote for anyone, however immoral, who supports their political positions.”

So do evangelicals simply not believe the president’s vast accusers and critics, or do they recognize his sins, but view their support of Trump as a lesser of two evils, or a cause for the greater good?

These questions, and more, are explored in a new podcast by Harvard Divinity School called “Beyond Belief.” The four to five episode, limited-run series examines President Trump and religion. In the first episode, Dudley Rose, Professor of Ministry Studies at HDS and ordained minister in the United Church of Christ, discusses Trump and evangelicals.