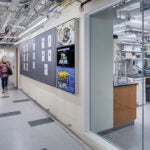 Maya Jasanoff, Coolidge Professor of History, was recently named one of the winners of the 2017 Windham-Campbell prize in recognition of her nonfiction writing. Jasanoff is the author of “Edge of Empire: Lives, Culture, and Conquest in the East, 1750-1850” (2005), and “Liberty’s Exiles: American Loyalists in the Revolutionary World” (2011). “Liberty’s Exiles” won numerous distinctions, including the George Washington Book Prize and a National Book Critics Circle Award. Jasanoff has been an ACLS Charles A. Ryskamp Fellow, a Cullman Center Fellow at the New York Public Library, and a Kluge Fellow at the Library of Congress. Her book reviews and essays have appeared in numerous publications, including The Guardian and The New York Review of Books. She is currently completing a book about the life and times of the writer Joseph Conrad.

Established in 2013 with a gift from the late Donald Windham in memory of his partner of forty years, Sandy M. Campbell, the Windham-Campbell Prizes are administered by the Beinecke Rare Book and Manuscript Library at Yale and include a $165,000 cash prize per winner. The awards will be conferred Sept. 13–15, 2017 at an international literary festival at Yale, celebrating the honored writers and introducing them to new audiences.