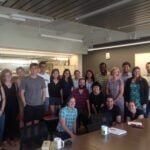 As Peruvian researcher Jaime Miranda described the administrative hassles and corruption standing in the way of better cardiovascular care in his country—including long lines and days of missed work for the poor and excessive prescriptions from specialists for the wealthier and better-connected — his colleagues in the room, physicians and public health professionals from developing countries, nodded in recognition. All of them had similar stories about the challenges, but also opportunities, of working to improve heart health in their countries.

The researchers were participating in the summer program for the Bernard Lown Scholars in Cardiovascular Health, which was held at Harvard T.H. Chan School of Public Health from July 6 to Aug. 4, 2017. Launched in 2008, the program is named in honor of Bernard Lown, a renowned cardiologist and professor emeritus at Harvard Chan School who received a Nobel Peace Prize as the co-founder of International Physicians for the Prevention of Nuclear War. Scholars apply to take short courses together on campus, followed by a workshop in which they develop proposals aimed at prevention of cardiovascular diseases. At the end of the program, they have the opportunity to submit their proposals for seed funding. Those who are funded may be invited to return the following year to present their progress and mentor the next year’s cohort. All receive mentorship remotely from Harvard faculty and are connected with other Lown Scholars around the world.

This year’s program hosted 11 scholars from India, Iran, Latin America, and Sub-Saharan Africa. Faculty Director Goodarz Danaei, associate professor of global health, said that the scholars’ proposals “embody the social responsibility aspect of Professor Lown’s work to help those most in need.” Lown is still involved with the program and meets with all Scholars to listen to their stories and discuss their ideas.

Agbonvihele Oko-oboh, a public health physician from the University of Benin Teaching Hospital in Nigeria, is passionate about working in rural communities to prevent cardiovascular diseases. “The program has exposed me to the best people from around the world,” he said.

Brazilian researcher Marcia Scazufca, from the Institute of Psychiatry at the University of São Paulo, focuses on cardiovascular disease risk among elderly people with depression and dementia. She developed a proposal for a randomized trial to improve cardiovascular health in socioeconomically deprived urban areas. The program was a productive time away from her work, she said. “Here, we were able to be students again for a few weeks. We had time to think.”

Rakesh Suseela, assistant professor in community medicine at Amrita Institute of Medical Sciences in India, is proposing to evaluate whether a community-based peer education program led by women improves hypertension control in urban slums. “I am going back home with increased motivation, confidence, and energy,” he said. “Doctor Lown asked me to think higher, and he really motivated me to do better things in my life. If I had not come here, I would be thinking that I was doing fine. But now I think that there are more things I can do.”