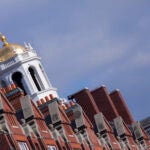 The Honorable Loretta Lynch ’81, J.D. ’84 will deliver the 2023 Dr. Martin Luther King Jr. Commemorative Lecture at Harvard. The annual lecture will be held in October.

Lynch served as the 83rd U.S. attorney general from 2015 through 2017 — only the second woman, and the first Black woman to hold that office. During her tenure, she worked to ensure equal protection of the law, notably in defense of LGBT equality in the Supreme Court case Obergefell v. Hodges, which made same-sex marriages legal in all 50 states. She vigorously defended the Voting Rights Act, challenged discrimination against transgender people, and worked to reform law enforcement practices and police training.

“The granddaughter of a sharecropper and pastor who fought against the evils of Jim Crow, Ms. Lynch has committed herself, throughout a long and distinguished career, to social and racial justice,” said Harvard President Larry Bacow. “During her tenure as the 83rd U.S. attorney general, she advanced democracy, equal justice, and the rule of law. She fought against discriminatory new obstacles to the hard-earned right to vote; she vigorously prosecuted hate crimes that targeted people, in her words, ‘because of what they look like, where they worship or whom they love’; and she investigated police brutality and challenged unconstitutional law enforcement practices in places throughout the country so that we might edge nearer to the ideal of a nation of laws, of a nation of equal justice under law.”

Lynch also served as U.S. attorney for the Eastern District of New York during both the Obama and Clinton administrations, where she defended civil and human rights and prosecuted organized crime and public corruption cases. She served on the team that won a conviction against the police officers who assaulted Abner Louima, a Haitian immigrant.

While in private practice, her extensive pro bono work included special counsel to the International Criminal Tribunal for Rwanda, investigating allegations of witness tampering and false testimony. She also trained junior lawyers who prosecuted those responsible for the 1994 genocide and human rights violations.

At a young age, Lynch, the daughter of a librarian and a Baptist minister, became inspired by students who planned anti-segregation boycotts at her father’s church and by listening to stories of her grandfather’s heroism in helping Black families to relocate away from locations where Jim Crow was the norm in the 1930s. Lynch is a graduate of Harvard College and Harvard Law School, and is currently a partner at Paul, Weiss in New York.

With leadership from the Office for Equity, Diversity, Inclusion, and Belonging, the annual Dr. Martin Luther King Jr. Commemorative Lecture each year recognizes and honors those who have, like King, committed themselves to social and racial justice. All members of the Harvard community were invited to submit a nominee for the 2023 lecture.